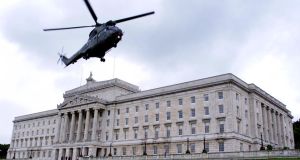 The Progressive Unionist Party put forward its vision for reconciliation amid ongoing political stalemate between the main parties at Stormont over a strategy to bring communities together. Photograph: Ferran Paredes/Reuters

Nationalists need to acknowledge that Northern Ireland will remain an integral part of the UK for the foreseeable future if a process of reconciliation is to work, the Progressive Unionist Party has said.

Setting out proposals for healing sectarian divisions in the region, the PUP said it had to been driven by society, not politicians.

The party, which has links to the Ulster Volunteer Force (UVF), put forward its vision for reconciliation amid ongoing political stalemate between the main parties at Stormont over a strategy to bring communities together.

Its document Transforming the Legacy called for a society-wide consultation exercise to establish the parameters for participation and responsibility in such a process.

“There are no political parties in Northern Ireland qualified to drive a process of reconciliation,” the PUP statement argued.

“All have contributed to a greater or lesser degree to the divisions that we must address. A political party’s view of reconciliation tends to reflect their own ideology and thus reconciliation becomes dependent on acceptance of their political objectives and aspirations.

“However reconciliation is defined, we believe that it will not work if conceived as an extension of the political process.

“In that instance, reconciliation will become little more than a reinforcement of the two-horse political race that currently dominates. It will be about point-scoring and securing and protecting political interest.

“No, for reconciliation to work it must be a social rather than political process. That is, it must enable all sections of society to have a say and a stake in how the past is interpreted, explained and memorised.

“Only when we have a process which is comprehensive enough to accommodate all the stories and experiences of conflict can we say that dealing with the past is now possible.”

“However, there needs to be a recognition that for the foreseeable future Northern Ireland is an integral part of the United Kingdom and reconciliation needs to be sought in the context of that political reality.

“We welcome a process that facilitates the nationalist narrative and contributes to a wider understanding of the impact that conflict had on the nationalist community. Nationalists should be afforded the same opportunities to participate in a process of dealing with the past as any community.

“We ask that this be no different for loyalism too. No individual, party or group should be favoured over any other if reconciliation is to work; and no reconciliation process can have merit if there is any hint of exclusion or bias.”

The PUP said people also had to be vigilant against those who would seek to manipulate reconciliation for their own ends.

“We will not allow this to happen,” the party said.

“At all times reconciliation must be transparent, fair and equitable.

“The conditions for entry into such a process must be carefully thought through and all sections of society must be involved in a consultation exercise to establish parameters for participation and responsibility.

“For Northern Ireland to deal with its past everyone must be involved. If we are going to move ahead together as a society we all have a responsibility to participate in that process and we must be charitable in how we approach it.

“We recognise the need for sensitivity in addressing the scale of suffering and pain caused but we must also avoid reopening old wounds or re-energising embers of revenge and retribution.

“Reconciliation offers a real chance of achieving a shared space where all can contribute to understand the effects of conflict and how violence impacted on Northern Ireland as a whole. We welcome this opportunity providing the conditions are right and the impetus for involvement is honourable.”