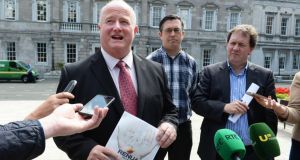 Renua Ireland’s deputy leader Billy Timmins has rejected a claim from Fianna Fáil that the new party has been “ripping off” its policy documents. Photograph: Cyril Byrne

Renua Ireland’s deputy leader Billy Timmins has rejected a claim from Fianna Fáil that the new party has been “ripping off” its policy documents.

“Fianna Fáil were in government for a long period of time...from our point of view we’re quite happy for any policies, be it ours or others, if we believe its progressive, being implemented,” Mr Timmins said.

“When we launched on March 13th we had 16 policies. Three of them have been launched since in a fanfare by Government. It may be coincidental, it may have been otherwise, but we don’t care once it’s progressive.”

Meanwhile, Renua has proposed a four-point plan to improve the budgetary process, which it has described as “amateur”.

The party wants Dáil committees to be given legal powers of budgetary scrutiny as well as a formal oversight role.

Oireachtas committees would be given training and access to financial expertise to facilitate meaningful engagement and decision-making during the budgetary process under the policy.

Renua also wants to see TDs and Senators scrutinising budgets “in real time” and to see the Irish Fiscal Advisory Council (IFAC) give independent estimates and costings for political manifestos and proposals from both government and opposition parties.

Turning to Renua’s position in opinion polls, Mr Timmins said: “Maths wasn’t always my strong point but we were one per cent...we went to two, so that’s 100 per cent increase.

“If it goes up incrementally then we’ll be up to four per cent next month and we’ll be somewhere around 16 per cent come the general election.”

However, Mr Timmins said the electorate had not yet made up its mind about the party.

“On a serious note the way I look at it is politicians are unpopular at the moment, particularly political parties...Until such a time as the election is called be that this October be it next February, the public’s mind won’t concentrate on what they’re going to do with your vote.”

He said he believed Renua would “get a far greater per cent” than the polls were predicting.