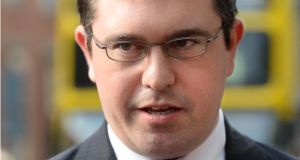 Renua Ireland’s Terence Flanagan had a “mental blank” during an excruciating interview with RTÉ Radio on Friday evening, party sources have said.

Mr Flanagan had what was described as a “meltdown” on air when interviewed on Drivetime about the launch of the new party of which the Dublin Bay North TD is a member.

During the course of the three-minute interview, Mr Flanagan was unable to complete answers and cut off some answers mid-sentence.

The interview provoked a huge reaction on Twitter, with a lot of sympathy from many contributors about a “car crash” radio interviews. However, some of his political opponents, such as Socialist Party TD Joe Higgins and People Before Profit councillor John Lyons, criticised Mr Flanagan.

When asked about why policies had not been revealed in key areas such as health and education, Mr Flanagan responded by saying there were a lot of areas that had been included in party policy, and referred to compassion and solidarity before his answer tapered off.

When asked about if the party pitching tax policies to the self-employed was telling of something, he replied: “”It’s a party that’s going to ensure promises,” but was unable to complete the sentence.

After a short silence, Ms Wilson said “we will stay with taxation” and asked him about what the party offered PAYE workers.

“Emm for the the PAYE workers?…..” said Mr Flanagan before seizing up again. As sounds of rustling papers could be heard, Ms Wilson finished the interview : “Terence I think we’ll leave it there for today.”

Mr Flanagan is said to have known he had done a terrible interview. Party sources said he had had a brain freeze and had not recovered.

A Dáil Deputy since 2007, Mr Flanagan is known to be a poor performer on live radio and is somewhat bashful when involved in public speaking.

He has nonetheless made a number of strong speeches in the Dáil, not least on the continuing impact that the Stardust fire tragedy from the 1980s has had in his constituency.

The leader of the Green Party in Britain Natalie Bennett had a similar experience several weeks ago when interviewed on LBC radio in London. She was unable to explain how the party would fund 500,000 council houses it had promised to provide. She said afterwards that she had had a “mind freeze” during the interview.