‘Most important thing is that when people come ... we should have strong programme of integration’ 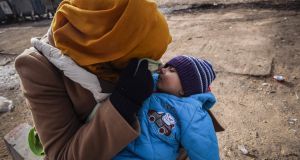 A migrant woman and a toddler wait for a bus at a transit camp in the southern Serbian town of Presevo on January 9th, 2016. Photograph: Armend Nimani/AFP/Getty Images

The State has committed to accepting 4,000 refugees over the next two years and has identified more than 20 locations to house them.

Ms Burton said the refugees coming to Ireland are all fleeing war and should be integrated into Irish society upon arrival. “Yes of course there has to be a screening process, and that screening process in the case of Ireland is very thorough and exhaustive.

“We have experience of that down the decades with people who came into Ireland as refugees. What I would just say is the most important thing is that when people come to Ireland we should have a very strong programme of integration.”

Minister for Justice Frances Fitzgerald said those who come to Ireland under the relocation programme will come from migration hotspots in Italy and Greece.

Ms Fitzgerald said their case files will be provided from the countries from those countries.

She said: “All other pre-clearance measures for persons being relocated from Italy and Greece including a Garda security assessment of case files; Garda interviews in the country of refuge; the checking of fingerprints against national and international databases and pre-departure health screening will be carried out in keeping with established practice as for refugees under the resettlement programme.”

The statement comes after Renua leader Lucinda Creighton had called for screening of refugees in light of the Cologne attacks.

Meanwhile, the Irish Refugee Council has raised concern about the International Protection Bill which streamlines the asylum process.

The legislation, which was considered by the Council of State, is a step backwards, according to the council.

The body said there are insufficient safeguards to allow full and proper consideration of claims which risk incorrect decisions being made at first instance.

Chief executive Sue Conlan said: “At a time when Ireland should be increasing the role that it plays in response to the refugee crisis, this Act will mean that many will not get the protection that they need.”