Proud man of ‘the soil’ looks set to stir up Dáil 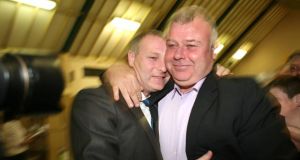 Success came swiftly on Triple Crown Saturday but, in the time-honoured style of political coronations, Michael Fitzmaurice waited until the last minute to make his winning entrance.

Counting was over and excitement was building in the small GAA hall at Dr Hyde Park in Roscommon. Fitzmaurice – farmer, contractor, turf cutter, councillor – was about to be elected to Dáil Éireann to represent the rural constituency of Roscommon-South Leitrim.

There was a good crowd inside and a larger crowd smoking outside – lots of men with huge arms and farmers’ tans.

His close political ally Ming Flanagan waited inside, fielding congratulations and hearty slaps on the back.

For Ming was a winner too.

Much, much earlier, scarcely an hour into the count, when no more than a dozen boxes had been opened, he called it: Fitzmaurice, the man he mentored, would be going to Leinster House.

The Fianna Fáil boys, experts at doing the tally, were quietly agreeing.

“It’s fantastic” said the MEP, whose election to the European Parliament led to the byelection. “We now have the Triple Crown of Representation – the council, the Dáil and Europe. ”

He had to wait a long time to hear confirmation. It was dark outside when the result was declared.

They were gone too.

Of the four, Gerry Adams had most cause to look on the bright side, although when he departed for the other count in Dublin South West, Sinn Féin was still in with a slim chance. Then Socialist Paul Murphy overturned Cathal King’s poll-topping achievement to take the seat comfortably on preferences.

Back across the Shannon, Martin Kenny also increased the party’s vote, but he was beaten into fourth place by Fine Gael.

If King’s shock defeat came as a sickener to Sinn Féin, the same can be said for Fianna Fáil in Roscommon-South Leitrim. The party threw everything into their campaign, with Micheál Martin canvassing like his leadership depended on it, despite all assertions to the contrary.

In the closing few weeks, he was even turning up at 8am Masses in the constituency.

Reaching for the silver lining, Micheál said the party’s vote had doubled since 2011, overlooking that it was down on their recent local election showing. There wasn’t much he could say about Fianna Fáil slipping ever further down the critical list in Dublin. Ivan Connaughton had topped the poll, which was a comfort.

As for the leadership question? “I’m leading the party into the next general election, of that there’s no question.”

Somewhere in Galway, Éamon Ó Cuív licked his chops, sharpened his claws and prepared for mischief.

An upbeat Michael Ring bustled around, all business. Sure it was a great day altogether for Fine Gael in Roscommon, he declared. First-time candidate Maura Hopkins polled strongly, considering the litany of embarrassments at Government level.

And best draw a veil over the abysmal showing of Cáit Keane in the Dublin contest.

As for Labour, Minister Alan Kelly turned up to support Senator John Kelly, who made little impact. “This is the worst day, ever, of my political life,” sighed John.

Michael Fitzmaurice might have been enjoying the best day of his short political life, but victory wasn’t going to his head. While the count rolled on, he was working on his farm in the Suck Valley on the Galway Roscommon border, dosing cattle and moving hay. Ming – in flying form – kept an eye on things in the GAA hall.

Like Paul Murphy in Dublin South West, Fitzmaurice doesn’t live in his constituency and so couldn’t vote for himself. But the farmer from Glinsk is perfectly situated in the new constituency of Roscommon-Galway and odds on to retain his seat.

No wonder Ming was delighted.

“Why stop here? There will be a byelection down there and if ever there’s a seat to target, that’s the one to target.” With more to follow – that’s the plan.

One thing has to be said about Michael Fitzmaurice after he made his national debut on Saturday night – the man is definitely not, as some have styled him, a “Mini-Ming”.

But before he could make that debut, he had to get into the hall first. Easier said than done. Fitzmaurice, who is a giant of a man, was engulfed by cheering supporters when he approached the door.

He was carried through the door on a wave of wellwishers with two big farmers trying to clear a path inside.

“Put him up! Put him up!” cried the supporters, as he went to embrace Flanagan. “G’wan the Ming Man!” But this was the former head of the Turf-cutters and Contractors Association they were looking to hoist aloft, not the slight framed MEP.

“We’re here to take over. You better believe it,” roared an elated Ming.

While he is best known for campaigning for turf-cutters’ rights, Fitzmaurice’s first outing proves he is not one-dimensional. “I’m no one-trick pony” insists this horse of a man.

He is a very impressive speaker. He speaks with passion and persuasion, a wonderful ear for the music of words. You can see why he commands such strong support. When the new deputy gave his victory speech, the packed hall was silent, even the count staff stayed and listened.

Fitzmaurice speaks for the people of rural Ireland. He speaks of emigration and Government neglect and mourns what it is doing to communities.

“We can’t drive everyone to Dublin – the country would nearly tip over. We have to make a sustainable life for everybody.”

At times listening to Fitzmaurice and Flanagan, it can sound like they are pitting rural dwellers against urban dwellers, particularly Dubliners. Ming, in particular, sometimes gives that impression.

And yet, they both welcomed the election of Paul Murphy in Dublin South West. Two ends of the same political schtick.

Proud to be a bogman

“I put my hand on my heart and I say, first of all, I’m an Irishman, second of all, I’m a west of Ireland man and thirdly, I come from the soil.”

His family were on hand to witness his triumph. Aisling (14), Patrick (12) and Nadine (9), along with mother-in-law Frances Griffin and his wife Maria.

She is proud of her husband and grateful to the people who came from all over the country to help in his campaign.

“It was such a big week in Glinsk because we also had Sean Parker’s funeral,” she said.

Sean Parker was the man who left the village for England many decades ago and died there, a penniless old man with no known relatives.

It was an inspiring speech; a refreshing departure from the bland platitudes and scripted promises you get from the shiny, soon to be whipped, party people.

Dublin council promised to drop claims for €12m ‘in return’ for white-water rafting grant 02:39
Election 2020: Parties warned of ‘insane’ election promises as Varadkar offers Martin coalition 02:37
New coronavirus is increasingly likely to spread to EU, health bodies warn 02:21
Election 2020: Record share of women running for Dáil seats 02:20
‘I don’t know if he died . . . but I don’t want him in the Tuam tanks’ 01:49
SUBSCRIBER ONLY