Presidential election: possibles and probables for the Áras race

Candidates need backing of four councils or 20 TDs or Senators 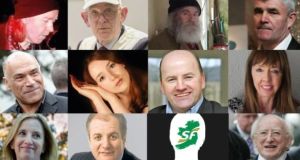 The Government is signing the presidential election order on Tuesday, kick-starting a 28-day period in which hopeful candidates can secure a place on the ballot paper to take on Michael D Higgins in the autumn.

Polling will take place on Friday, October 26th, while the inauguration would take place on November 11th, assuming there is a contest.

At the time of writing, 10 people – some more likely than others to get nominations – have expressed an interest in standing as Independent candidates against Higgins, either through official announcements of intent or via the time-honoured political tradition of “actively considering” a run. Some are already making promises that the role of President cannot fulfil.

They have two options to enter the contest proper: by gathering 20 signatures from TDs and Senators or by winning the backing of four county councils. As the Dáil does not return from its summer recess until September 18th, the focus for most aspiring candidates is on the councils.

President Michael D Higgins: The President will nominate himself as an Independent candidate for a second term.

Sean Gallagher: The runner-up in 2011 is expected to formally declare his candidacy in the weeks ahead.

Gavin Duffy: The businessman has already addressed a number of councils and is canvassing councillors.

Joan Freeman: The Pieta House founder has also spoken at a number of councils and lobbied TDs and Senators.

Kevin Sharkey: The artist has said the country needs to “wake up” to immigration and has also called for a referendum on Ireland’s EU membership.

Sinn Féin: The party will announce its candidate on September 16th. Among the possibilities are the Munster MEP Liadh Ní Riada and the Belfast solicitor John Finucane. Party councillors will abstain in any presidential-nomination votes.

Pádraig Ó Céidigh: The Independent Senator and Galway businessman, who was once chairman of Aer Arann, says he is still weighing up a run.

Gemma O’Doherty: The journalist has asked people to contact their TDs and Senators and ask them to sign her nomination papers. She has accused the Government of failing Ireland “on a terrifying scale”.

Patrick Feeney: The former Aer Lingus employee won 22 votes in Galway West at the last general election, and has addressed Carlow County Council about the presidency.

Marie Goretti Moylan: The Athlone woman was due to address Carlow County Council earlier this month but did not show up. Earlier this year she said she would safeguard the “economic interests of all Irish citizens”.

John Groarke Groarke, a farmer from Co Roscommon, has said people “running for these high offices are all very well paid, most of them, and the rural people of Ireland don’t get a look-in at these jobs”.

Sarah Louise Mulligan: Mulligan, from Glasnevin in Dublin, is chief executive of irishwholovepresidenttrump.com. She has said: “Maybe Ireland needs someone a little bit like that. I like him a lot.”