Presidential candidate for Sinn Féin to be announced in September 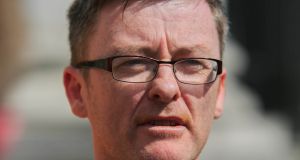 Sinn Féin has said it will announce its presidential election candidate in September about six weeks before polling.

Nominations will open on August 20th and close on September 10th while the party’s Ard Chomhairle will meet on September 16th to select the candidate for the presidential election, to take place in November.

The Sinn Féin candidate will challenge President Michael D Higgins after he announced his intention to seek a second term in office earlier this month.

There may be a number of other candidates in the running, however no one has officially put their name forward.

Mr Cullinane said the Sinn Féin candidate would embody the changes that were seen in the same-sex marriage and abortion referendum.

“A lot of women came out in big numbers in the last [abortion] campaign,” he added. “There are still massive issues in relation to gender pay and the patriarchal society women still live under.

“Women and men are demanding more social change and we want to see that.

“We want a candidate who can embody that, can reach out and speak to those people.”

While Fine Gael, Fianna Fáil and Labour have all backed the current president, a number of others have expressed an interest in running for the presidency including Independent Senators Pádraig Ó Céidigh and Joan Freeman. – PA