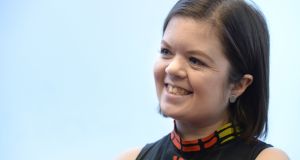 Sinéad Burke, disability advocate, writer and campaigner, has been appointed to the Council of State. Photograph: Dara Mac Donaill / The Irish Times

The President can appoint up to seven members who join current and former taoisigh, former presidents Mary Robinson and Mary McAleese, the chief justice Mr Justice Frank Clarke and the Attorney-General Séamus Woulfe SC in advising him on matters such as whether to refer a Bill to the Supreme Court.

2 How supermarkets trick us into buying unhealthy food, and what we can do about it

3 Fintan O'Toole: Prince Philip - asylum-seeker and citizen of nowhere, but rich and white

12 Limits on AstraZeneca vaccine will cause ‘hesitancy and concern’, Favier warns

13 ‘Fame? If you have any personal demons, you’re quite not prepared for it’

14 Q&A: Where do we stand on AstraZeneca vaccine now it is restricted to over-60s?

17 Wife and partner of men who died in sewer incident secure settlements of €175,000

19 Vaccine safety concerns must be addressed through rollout, Glynn says

20 Up to 15,000 vaccinations cancelled today following advice on AstraZeneca jab

29 Customer experience in Ireland: The best and worst companies

30 Ken Early: It’s time for Alexander-Arnold to move to the middle

33 Covid-19: AstraZeneca vaccine should not be given to patients under 60, Niac advises as appointments cancelled

35 Warren Gatland: It’s nothing to do with ‘do I feel the need to have an English coach?’

36 Owen Doyle: IRFU should be encouraging representation for Irish referees

37 Q&A: Which Level 5 restrictions are being lifted from today?

40 The extraordinary and turbulent early life of Prince Philip