Polling day: What to watch out for over the next 24 hours

Inside Politics: Brexit was not the dominant theme of the elections as some had predicted 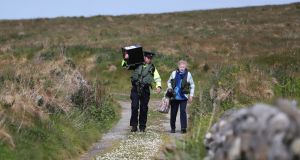 Garda Adrian McGettigan and presiding officer Carmel McBride carry a ballot box to the polling station on the island of Inishbofin. Voters on the remote isle off the coast of Donegal were among the first to cast their ballots in the local and European election. Photograph: Niall Carson/PA Wire

There have been some insipid election campaigns in the past but this one is up there with them. There were lots of portentous pronouncements in the run-up to the European elections declaring these were the most important since we joined the EU.

But if they were, that was lost on Joe Public. Voters did not really become engaged until the final days of the campaign. And even then it was almost half-hearted.

1 We need to pay very close attention to what is happening in Britain now
2 Miriam Lord: Taoiseach is trapped in a Zoom session from hell
3 The human cost of Covid-19: new figures reveal the toll on Ireland's care homes
4 Emily Maitlis replaced as Newsnight episode host following Cummings monologue
5 Live beside the Edge in docklands penthouse for €1.7m
6 Coronavirus: ESRI warns of deepest recession in Irish history
7 New rules for arrivals to Ireland start today - what is changing?
8 Two-metre rule, summer camps and golf considered by Ministers
9 Trump to sign executive order on social media, White House says
10 Brazilian gang held in Offaly had sub-machine gun and student visas
11 Bake-off: Matt Damon bids farewell to bakery as he prepares to leave Ireland
12 Britt Ekland: 'The Bond girl of my era exists no more'
13 Dave Hannigan: Trump gets the clubs back out as death toll keeps rising
14 Ross O’Carroll Kelly column 'not racist towards English people'
15 What do you do when you meet a bear on a walk? Copy this 12-year-old
16 What is in the EU’s €750bn recovery plan and how will it affect Ireland?
17 Brown Thomas and Arnotts shoppers will be able to book time slots for entry
18 Beware of the rush to get back to normal business amid Covid-19
19 Irish economy to contract by 12%, ESRI forecasts
20 George Floyd death: Protesters and riot police clash in Minneapolis
21 Cash haul of €700,000 linked to veteran trafficker 'The Penguin'
22 ‘Since coming out of lockdown I’ve been a mess, and I miss my children’
23 Safe return to play in New Zealand showcases the true value of sport
24 Why is a German court undermining the European Union?
25 ‘Ireland should take calculated risk’ in greater easing of Covid-19 restrictions
26 Newton Emerson: UK is failing the people of Hong Kong for a second time
27 Trump threatens to close down social media companies after Twitter fact-check
28 'Months of hell' - comedian Sil Fox cleared of sex assault in bar
29 Zoom calls with Rory and the GUI bake-off: Neil Manchip keeping the flag flying
30 Dr Bob Rotella: ‘If you focus only on the target you’ll play darn good golf’
31 Timeline: How the disaster in nursing homes unfolded
32 EU needs to rebuild GDPR after only two years
33 New HSE figures reveal the toll on care homes
34 Covid-19: Tax on unemployment payment could be collected by reducing credits
35 When did Johnson become so dependent on Cummings? Was he always this weak?
36 Coronavirus: South Korea cases jump to highest since early April
37 Where’s the beef? Outdated data leads to uncertainty on way forward
38 Broadband plan worth €3bn might be delivered in five years instead of seven, Dáil told
39 GSK to produce 1bn doses of coronavirus vaccine booster in 2021
40 Elon Musk rocket launch postponed due to bad weather
Real news has value SUBSCRIBE