Policing Authority not seeking to play ‘gotcha’ with gardaí 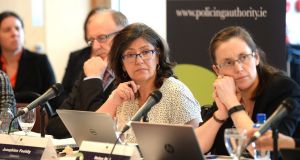 Josephine Feehily is to appear before the Oireachtas committee on justice. Photograph: Cyril Byrne / The Irish Times

The chair of the Policing Authority will state on Wednesday that her intention is not to engage in a game of “gotcha” with An Garda Síochána.

Josephine Feehily is to appear before the Oireachtas committee on justice to discuss policing matters since her appointment 21 months ago.

She will tell members that reform measures have still to be achieved by gardaí and the authority needs to continue to oversee the force as closely as possible.

Ms Feehily will say the authority’s persistent oversight role has been a very big change for An Garda Síochána and the Department of Justice.

“Oversight is not an end in itself and it is not a game of ‘gotcha’. It is about enhancing policing performance with a view to ensuring that communities are safe, that the country is secure and that the Irish people receive the best possible service from the Garda Síochána,” she will say.

“Community confidence and trust in the Garda Síochána remains strong in Ireland and that is a tribute to the work of the women and men in the Garda organisation throughout the country.”

Ms Feehily has been critical of the slow pace of reform with An Garda Síochána and the failure of Garda management to drive the change.

The authority has been tasked with finding a replacement for former Garda commissioner Nóirín O’Sullivan, who retired earlier this month.

Ms Feehily will advise the committee that she cannot go into details about the appointments process as it has not been decided. She will tell members anything related to an individual candidate cannot be discussed.

“I need to be careful not to say anything which might even by inference appear to related to an individual or to prejudice any future selection processes in which the Authority might be involved.”

Ms Feehily and the authority will meet with acting Garda Commissioner Donal Ó Cualáin this week to discuss the prosecution of protestors in Jobstown.

Mr Ó Cualáin will also be before the Oireachtas Public Accounts Committee to discuss the re-opening of six Garda stations.

An interim report was presented to the Cabinet in June and the names were subsequently released. The final report has to be completed.

Mr Ó Cualáin is facing questions over the criteria applied and how each was decided.

However, he has declined to give members of the committee a copy of the report’s finding insisting they are a matter for the Department of Justice.