PJ Mara obituary: flamboyant character who was central to FF for three decades

‘PJ Mara doesn’t so much do a job as weave a spell. His social skills are described in terms approaching awe’ 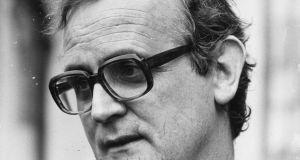 A file image of PJ Mara from 1983. He was Charles Haughey’s press officer and confidant in the 1980s and Bertie Ahern’s director of elections for each of the three-in-a-row victories between 1997 and 2007. File photograph: Peter Thursfield/The Irish Times 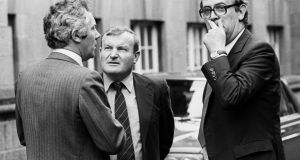 PJ Mara was a flamboyant, larger-than-life character who played a central role in Fianna Fáil for more than three decades.

He was Charles Haughey’s press officer and confidant in the 1980s and Bertie Ahern’s director of elections for each of the three-in-a-row victories between 1997 and 2007.

“There’ll be no more nibbling at my leader’s bum,” he added by way of explanation after Haughey had succeeded in expelling Des O’Malley from Fianna Fáil in 1985.

Mara, who took over the position as Fianna Fáil press officer in 1984 when the party was in opposition, quickly established himself as one of the features of Leinster House and did invaluable work for Haughey in mending fences with the media.

Born in 1942, Mara grew up on Millmount Avenue in Drumcondra on Dublin’s northside. His father, a garda from Co Meath, died when he was at school. His mother, whom he adored, reared him and his sister on her own.

Even as a child he was always well turned out, a habit that endured for life. The soccer writer Eamon Dunphy, who grew up near Mara, once joked that when they were in primary school PJ wore pinstriped short trousers.

After leaving school he worked in Boland’s Mills briefly before securing a job in Allied Textiles in Chapelizod.

In his 20s he met and married Breda Brogan from Kinvara in Co Galway. He then set up his own clothing company, Beeline, named after Breda, which he later sold to Penneys.

Later he went into the carpet distribution business, which was not so successful, and he was left with large debts.

The couple had a son, John, but Breda died in 2003 after a long illness.

From his youth Mara was a strong Fianna Fáil supporter, a passion he inherited from his parents. His father had been a Broy Harrier in the 1930s before becoming a garda.

As an ordinary foot-soldier in Fianna Fáil he supported Haughey during the arms crisis. He later travelled with him on the rubber-chicken circuit during the early 1970s, often acting as Haughey’s driver.

He was appointed as one of the taoiseach’s 11 to the Seanad in 1982 and Haughey made him party press officer in 1984 after the job had been turned down by Frank Dunlop and Seán Duignan, among others.

At the time Mara was at something of a loose end after the failure of his business but he took to his new post like a duck to water. An excellent raconteur, he was a fund of witty and politically observant stories of life in Fianna Fáil.

He kept the political journalists entertained with anecdotes and impersonations of the leading lights in the party, including his boss.

As a result journalists believed they were getting the inside track on what was happening in government but at the same time they never got much usable information.

In an affectionate piece in The Irish Times during the fourth heave against Haughey in 1991 John Waters described Mara thus: “PJ Mara doesn’t so much do a job as weave a spell. His social skills are described in terms approaching awe by even those journalists who know that his job is to pull the wool over their eyes.

“His modus operandi is inseparable from his personality. He creates a web of bonhomie and laddishness around himself which is difficult to resist. He is an apparently bottomless source of witty remarks, epigrams and he is a brilliant mimic.”

While Mara made it his business to charm political journalists he didn’t always take the time to impress general reporters who only crossed his path from time to time.

“The Boss rarely ventures forth without PJ at his side. Renowned for colourful language and denials he manages to keep reporters on side by wit, impudence and telling them to f**k off, something they love,” wrote one news reporter.

Another side to Mara was that underneath the jokes and funny impersonations lurked an intelligent and well-read man.

During one of the periodic controversies involving Haughey, a group of political journalists were gossiping in the Dáil bar with Mara.

Seán Duignan, then RTÉ’s political correspondent, likened Mara to Putzi Hanfstaengl, a legendary press officer for the German foreign ministry in the 1930s who rationalised Hitler’s policies for the foreign press. Mara took grievous umbrage at the comparison but what was surprising was not his anger but the fact that he immediately got the reference.

Apart from Duignan none of the other media people present had ever heard of Putzi Hanfstaengl.

“You go into that room where they all hate me, and you give them this,” screamed his leader at him the day after the quote was published, but relations were soon mended. It didn’t take Mara long to bounce back and he was soon referring to his boss as the “Caudillo” or even “El Diablo” rather than the Duce.

Mara’s irresistible charm ensured that he was quickly on good terms with most political journalists.

This was critically important because one of the main functions of a government press secretary is to provide regular briefings for political correspondents, who are known in Leinster House as the Lobby.

Mara had the ability to remain on good terms with the Lobby, regardless of whether individual correspondents had used his briefings in a friendly or hostile fashion, and through all the storms that inevitably beset any government he almost invariably retained his composure and good humour.

As well as getting on well with the political correspondents, Mara also won over potentially hostile Fianna Fáil TDs and opposition politicians as well. As a former senator he had access to the members’ bar in Leinster House and this became another forum for his funny routines and comical stories.

All this enabled him to perform the crucial function of acting as Haughey’s eyes and ears around Leinster House. Very little happened without Mara being aware of it and this was a vital source of intelligence for Haughey.

He was also useful in that he acted as a sounding board and could tell Haughey how the media or the Fianna Fáil parliamentary party would react to any particular development.

PJ, as he was known around Leinster House, though Haughey always called him Mara, had a meeting with his boss first thing on arriving at the office each morning, whether in opposition or in government.

They discussed the newspapers and the radio and television coverage of the major political happenings and planned out how to handle that day’s news.

Even on Sundays Haughey generally rang Mara for a quick run over the Sunday papers. For a man who always publicly dismissed the media and newspaper headlines Haughey always paid very close attention to what was being said about him.

After Haughey lost power in 1992 Mara went into business for himself as a PR adviser/lobbyist to a number of prominent business figures including Tony O’Reilly and Denis O’Brien.

He moved from his modest semi-detached house in Clontarf to Waterloo Road in the fashionable environs of Baggot Street.

He liked to tell the story of being picked up one night by a taxi driver who had regularly driven him home from Government Buildings to Clontarf. The driver automatically headed in the Clontarf direction until he was directed to turn around and go to Waterloo Road.

When he pulled up outside Mara’s grand new residence he shook his head and remarked: “Do you know what, PJ? That fellow Haughey was holding you back all these years.”

Having hitched his star to Denis O’Brien, Mara was ultimately appointed to the board of Digicel, the mobile phone company with an international reach. Mara regularly travelled with O’Brien to the Caribbean and beyond on business trips.

He continued his involvement in politics, acting as director of elections for Fianna Fáil in 1997, 2002 and 2007. He was given a lot of the credit for the party’s stunning performances in those elections.

He was embroiled in controversy when it emerged at the Flood tribunal that he had received substantial interest-free loans in the 1980s from businessmen Dermot Desmond and Oliver Barry.

Mr Justice Feargus Flood found he had failed to co-operate fully with the tribunal by not disclosing a bank account in the Isle of Man.

He bounced back from this finding, as from every other setback, with quips and funny stories that disarmed most of his critics.

He remained close to Haughey and regularly visited his former boss up to the day he died, regaling him with the latest gossip and anecdotes.

In June 2013, a decade after the death of his wife and at the age of 71, Mara became a father again with the birth of a baby daughter.

A loyal party man till the end, as recently as the resignation of Senator Averil Power from Fianna Fáil, he attempted to convince journalists who sought his view that it was the best thing to have happened to the party in years.