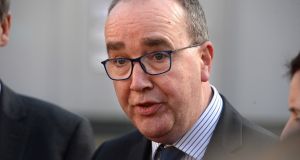 Hope has been missing from much of the Government’s messaging on the Covid-19 pandemic and “people need to be given hope”, the Dáil has been told.

Government backbencher John Lahart, a psychotherapist said that even people who had been virtually unaffected by the virus had suffered losses. “It could be that they cannot go to see their son or daughter playing the local sport. That’s a loss.

“People are angry about that and the Government needs to acknowledge it.”

Speaking during the debate on the Government’s road map for living with Covid-19 the Fianna Fáil TD said “we need to devise a way to give people something to cling on to or hope for, whether it is the promise of a great festival the likes of which has never been seen in the country or devising ways of memorialising those people who have been lost to Covid”.

He suggested local authorities be given significant budgets for fantastic public lighting displays that people could safely admire.

“ It will be a Christmas like no other and the State needs to step in.”

He stressed that “in our messaging, we need to find a way to give people hope. Hope has been missing from much of the messaging coming from the Government.”

Opening the debate on the road map Minister for Health Stephen Donnelly said the Government cannot continue to close the country down as it did in “chapter one” of dealing with Covid-19.

He said the road map for living with the virus was “chapter two” in combating coronavirus and it aimed to keep the country open while suppressing the disease.

Mr Donnelly also introduced a debate on the HSE winter plan and said robust testing and contact tracing system is “central to all efforts”. The HSE is finalising its model for testing and includes recruiting a permanent workforce as well as other service improvements.

The Minister added that he was working with the HSE to develop services as part of the €600 million winter plan to ensure resources went to “those areas that will see the most benefit as we approach the seasonal impacts on our hospitals and other healthcare services”.

Labour leader Alan Kelly pointed to the pledge to recruit an additional 12,500 nursing and consultant staff by April with 5,000 before Christmas. Mr Kelly told the Minister that “if you can get 12,500 people into the health service by next April I’ll buy you a good bottle of whiskey” and would do it “even if you can get to 10,000”.

Mr Kelly said it may seem flippant and it was not a joke but he could not see where Minister could get the nurses and specialists he was committed to delivering.

The Labour leader also called for comparative data for January to September this year compared to last year for serious issues like cancer and heartcare. “We have to be diagnosing the same number or proportion of people this year as last” for cancer and other non-Covid illnesses, he said.