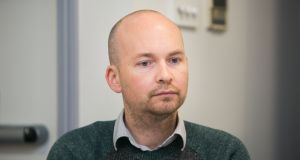 The Dun Laoghaire TD met Ms McDonald on Wednesday afternoon with the party’s Northern Ireland MLA Gerry Carroll, on behalf of People Before Profit, but without the Solidarity element of the group they operate with in the Dáil.

Neither Solidarity TD Mick Barry nor Rise TD Paul Murphy, who is also part of the group but has a separate organisation,were at the meeting.

Mr Murphy said he believed the group should operate together. It would be far more effective that the group “seeks to agree a common position and seeks to negotiate that position with others”.

Speaking to reporters Mr Boyd Barrett said his party wanted to discuss the possibility of having a left government that did not involve Fianna Fáil and Fine Gael.

“When People Before Profit said at the beginning of this campaign that it was possible to break the cycle of Fianna Fáil and Fine Gael and create a left wing government people laughed at us but that became the narrative of the election and now it is a real and living possibility.”

He added: “I think things are changing very fast in Irish politics. The landscape is shifting and we think change is possible, a different type of Ireland is now possible.”

Solidarity “is more than willing to meet Sinn Féin or any other parties that want a real transformation so that people’s needs and the planet come before profit”.

Mr Murphy said later that “I think that we should and I think will do our business as a parliamentary grouping”.

He said that all components of the group had slightly different approaches but they all agreed on basics and he believed it would be possible to agree a common position.

Solidarity-People Before Profit is made up of three different organisations but he hoped the group would meet this week and agree a common position.

Separate preparatory discussions were fine he said as people were entitled to talk to whoever they wanted to talk to, “but I think it will be best if we negotiate together”.

Solidarity is expected to hold a press conference on Friday to outline its position on issues for potential talks’ discussion.

Last year the parties split into three separate organisations when Mr Murphy left Solidarity but remained part of the grouping in the Dáil and retained his Dublin South West seat.