Pandemic payment may be needed for ‘much longer’ than a year, Dáil hears 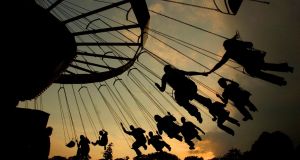 The Dáil heard Government support was needed for events like the Electric Picnic music festival to go ahead next year. Photograph: Haydn West/PA

Minister for Social Protection Heather Humphreys has ruled out restoring the €350 Pandemic Unemployment Payment (Pup) rate for workers in the entertainment sector because it would be unfair to those working in other industries.

Speaking in the Dáil on Tuesday, Ms Humphreys said the payment would have to be examined as part of the budgetary process because it might be needed “for much longer than we expected” and it had to be sustainable.

“Covid will be with us for some time,” she said.

Echoing comments earlier from Taoiseach Micheál Martin, who said the pandemic could have an impact throughout next year, Ms Humphreys said the payment was originally intended to last for 12 weeks and had now been extended for 12 months at least.

“It could well be that we may need to keep PUP open for much longer than we expected and that makes it all the more important that the rates of payment are sustainable,” she said.

“The Budget is in three weeks and we need to examine the next steps and future of PUP as part of the budgetary process”.

The Minister was responding to questions from Social Democrats TD Gary Gannon and Sean Sherlock of Labour, who appealed for the original €350 payment to be restored to workers in the live events and entertainment sector.

She said that as a former minister for culture, “I absolutely value the live entertainment and events sector”. She said workers in those industries made up 3 per cent of those receiving the payment.

“I do not think it would be fair to make exceptions for those who have previously worked in the arts or entertainment sector while applying the changes to over 97per cent of recipients who have worked in other sectors.”

Mr Gannon said what somebody working in live events in February - before the pandemic hit - earned would be very different from what they might expect to earn at the end of the summer festival season if it had gone ahead.

He said the Electric Picnic festival, which normally takes place in September, would be worth about €6.5 million to Stradbally, €20 million to Co Laois as a whole and €36 million to Ireland.

“In the absence of actually funding this sector are you confident such events would be able to go ahead next year?” he asked.

Ms Humphreys said they were trying to be as fair as possible and Covid- 19 would be around for some time. It had to be considered as part of the budgetary process to be sustainable over a period that could extend beyond a year.

“We’ve gone from a budget surplus in February to a deficit of over €20 billion,” she said. “We are borrowing but there’s no such thing as free money and we still have to pay it back.”

Mr Sherlock said the pandemic had been “absolutely devastating” for those in the live events sector and his party was making the case for the sector because “there is no time line for the restoration of those jobs effectively”.

He said he accepted if the Minister is “not of a mind to up the payment to €350”, she should then provide a “package of supports that directly go into people’s houses in a way that sustains them”.

Ms Humphreys said a taskforce had been established for the recovery of the arts and culture sector along with more than €140 million in additional funding for the industry.

She added that the Government would continue to engage with the sector. “I absolutely understand the difficult situation they’re ion because these people want to go back to work.”