‘Paltry’ increase in women in the Dáil ‘quite a blow’, conference told 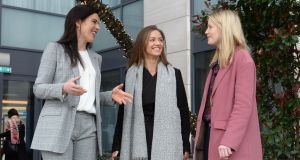 On her first day in Cork County Council, Holly Cairns watched as a colleague walked around congratulating the newly elected representatives.

“He said to a few who happened to be male, ‘congratulations, great campaign, well done, well deserved’,” she recalled. “And when he came to me he patted me on the shoulder and said, ‘well done, you look great’.”

The roomful of those attending Wednesday’s National Women’s Council of Ireland event on female participation in politics gasped, and yet there was no real surprise. A panel of eight elected and aspiring politicians were on hand to discuss exactly this kind of issue - the difficulties experienced by, and the fundamental need for gender equality.

Since that formative experience, Ms Cairns has been elected to the Dáil as a Social Democrats TD, a success tempered by her being the sole female member for the entire county of Cork.

“We can’t actually govern a society that promotes equality if it doesn’t exist within our government,” she said, summing up the entire morning conference in a sentence.

As part of International Women’s Week, the NWCI event was aimed at pushing various issues - childcare, domestic violence and healthcare among them - to the centre of government formation talks.

Director Orla O’Connor summed up last month’s election outcome in which just 36 of 160 TDs are women, an increase of just one since the last term.

“In this Dáil we will have 12 constituencies that have no women representing them,” she added, not to mention the lingering absence of Traveller, migrant or disability backgrounds.

Green Party TD Catherine Martin brought her own sobering statistical take - the paltry rise in women Dáil members from 22 to 22.5 per cent was “quite the blow”.

She said Ireland was now ranked 99th in the world for female representation, and that since 1918, just 130, or 9.7 per cent of the 1,341 people elected to Dáil Éireann were women. Only 19 have been ministers.

“They say more men with the name John or Michael have been elected to our Dáil than women so that needs to change,” she said.

Existing gender quotas in Dáil elections stand at 30 per cent for Irish parties and that is due to rise to 40 per cent. The NWCI want them expanded to local elections.

The next generation of young female TDs was embodied on Wednesday’s panel by Holly Cairns (30) and 27-year-old Claire Kerrane, Roscommon’s first Sinn Féin TD in over a century.