Fine Gael and Fianna Fail coming together to form the next government is looking more and more likely says Irish Times political correspondent Fiach Kelly, reporting from the count centre at the RDS. Video: Bryan O'Brien 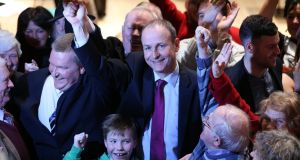 Fianna Fáil is within a touching distance of edging out Fine Gael as the biggest party in the State, senior party strategists say.

The party has increased its own estimates on seat wins since Saturday morning to more than 40.

A senior strategist, speaking on a background basis, said it now puts the range of possible seats for the party at between 38 and 45 but believes the party will get a seat bounce from being more transfer friendly when Independent candidates are eliminated.

An analysis by the Irish Times of all 40 constituencies suggests that Fianna Fáil could win more than 42 seats putting them within two to three seats of Fine Gael.

With a seat bounce, the party could win a second seat “against the grain” in constituencies such as Clare and Galway West. However, in many constituencies the battle with other parties, Fine Gael in particular, will come down to the final seat.

And after the near wipeout of 2011 in the capital, Fianna Fáil is now poised to win six seats in Dublin. The only discordant note for the party is that Mary Hanafin will not win a seat in Dún Laoghaire. Generally Fine Gael has done well in the constituencies south of the Liffey, winning two seats in each.

For the Labour Party the picture is dismal. It looks like holding seats only in between seven and nine constituencies: Wexford, Cork East, Dublin North, Tipperary, Limerick City, Dublin West, Lonfgord-Westmeath, and Dublin Bay North.

Fianna Fáil has been quietly briefing in recent weeks that people would be surprised at how may constituencies in which it would take two seats.

The most audacious coup seems to be Carlow-Kilkenny where the party could win three seats. Elsewhere it looks set to take two in the two Kildare constituencies; Donegal, Cork South Central and could take two in Mayo, Galway West, Clare, Cork North West and Wexford.

Sinn Féin looks like it will finish in the mid 20s but the party has had a few setbacks which have taken the gloss of big gains such as John Brady in Wicklow, Kathleen Funchion in Carlow-Kilkenny, David Cullinane in Waterford and Eoin Ó Broin in Dublin Mid West. Paul Donnelly may be edged out in Dublin West and Martin Ferris looks like he is facing a big battle in Kerry, where he has been adversely affected by the rise of the Healy Rae clan.

The Fianna Fáil strategists said it was premature to talk about the post electoral landscape other than to dismiss the notion of a rotating taoiseach.