Onus on Sinn Féin to set up meeting with Kenny 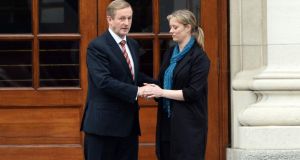 The Government has said the onus is on Sinn Féin to arrange the meeting it requested between the Taoiseach and the four people named as having carried out the investigations into the sexual abuse allegations of Maíria Cahill.

A spokesman for Taoiseach Enda Kenny said yesterday it was not for the Government to take the initiative on the meeting which was demanded by Sinn Féin leader Gerry Adams during a tense and heated Dáil debate last week. “It is for Sinn Féin to make the move,” he said.

However, there seems no likelihood of the Taoiseach meeting the four people who, Ms Cahill, said interrogated her when she came forward with allegations she was sexually abused by an IRA member when she was 16.

The IRA member from Belfast was more than 20 years older than her.

Notwithstanding a direct request in the Dáil by Mr Adams for the Taoiseach to meet the four, and Mr Kenny’s agreement to a meeting, the prospect of such a meeting was firmly ruled out by Peter Madden, the solicitor representing the four people Ms Cahill said interrogated her.

In a statement late last week, Mr Madden contended the Taoiseach had set aside the judicial process and the findings of a court of law. In a response to the Taoiseach saying he would not stand in judgment on the four, Mr Madden said: “He has already passed judgment on them. I am advising my clients not to meet the Taoiseach at this stage.” He noted that reviews and processes were continuing.

Mr Adams had called for such a meeting a number of times during last week’s debate, asking Mr Kenny to facilitate a meeting with those against whom Ms Cahill made allegations. “These are not nameless anonymous people. These are decent people. Will the Taoiseach meet them and listen to their version of the story and then make a judgment on these matters?” he asked.

The Taoiseach’s spokesman said last night that Sinn Féin and the IRA still needed to respond to the question posed by Mr Kenny last week. “Mr Adams admitted the IRA moved people South. Where are they now? It’s a child-protection issue.

“Gerry Adams said he had no knowledge of that matter. Given his story has changed significantly on Maíria Cahill, the Taoiseach has said it is simply not plausible to say ‘people were moved South but I don’t know who they are or where they are’,” the spokesman said.

In an address to party supporters in Belfast on Saturday, Mr Adams made no reference to a meeting for the four people involved but argued that neither Mr Kenny nor Fianna Fáil leader Micheál Martin had ever sought to meet him “to address the false allegations that they have levelled against me and others in Sinn Féin. “Instead, they have rushed into media with their vindictive claims,” he said.