On the canvass: Sinn Féin confident it can retain two seats in Louth

With Gerry Adams stepping down as a TD, Sinn Féin face an uphill battle to retain their two seats in the Louth Constituency. Video: Enda O'Dowd 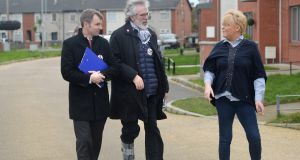 Sinn Féin’s canvassers, lit up on a grey January afternoon in their party-branded high-vis vests, are fanning out like ground troops across the Cox’s Demesne housing estate in Dundalk.

Gerry Adams, the party’s former leader who is retiring from politics and his Dáil seat in Louth, follows, very slowly. He is wearing a fracture boot.

Asked what happened, he jokes about “shadowy figures” – a dig at the Fianna Fáil leader Micheál Martin and the people he claimed were in control of Sinn Féin.

Later, as a constituent and diehard fan rushes out from her house to give Adams a hug, Adams explains he went over on his foot at home.

Tagging along with the former Sinn Féin president is the more nimble Ruairí Ó Murchú, a 41-year-old county councillor, who acknowledges the pressure of trying to retain the seat being vacated by this veteran of Irish politics: nobody wants to be the guy who loses Gerry Adams’s seat.

Ó Murchú is confident that it was not just the personal vote for a high-profile political figure that elected both Adams and his Sinn Féin running mate Imelda Munster in 2016.

The Dundalk councillor came third in last year’s local elections but is confident that “with a good ground game” the party can return two TDs in the election.

Ó Murchú observes, in a nod to the party’s recent polling figures, that the ground is “somewhat better”.

“We knew it would be a hard ask, particularly not having Gerry Adams running, and we did have a sobering local election. The results we are getting on the doors – we think we are in a really good place and that we can do this,” says Ó Murchú , a councillor since 2017.

The party has poured a lot of effort into this county on the edge of the Border where support for Sinn Féin and Irish unity has been solid for years.

The five-seater constituency is a bellwether for the election.

Louth is said to have a seat each for Sinn Féin (either Ó Murchú or Munster), Fianna Fáil (undoubtedly, Declan Breathnach TD) and Fine Gael (probably Fergus O’Dowd TD).

The final two seats will be a battle between the three parties seeking a second seat and a group of three others: former Labour TD Ged Nash, the Green Party’s long-time contender Mark Dearey and Peter Fitzpatrick, who is standing as an Independent this time around.

Fitzpatrick is the unknown quantity; the former Louth Gaelic football manager won a seat in 2016 for Fine Gael but left the party in 2018 over its pro-repeal stance in the abortion referendum and his frustrations over life on the backbenches.

It is not clear whether as a celebrity candidate with a strong local profile he will take votes from Fine Gael by presenting himself as an ousted rebel, thereby tapping some of the clear anti-government sentiment, or whether he will struggle.

Adams is certain of his own party’s chances of retaining two seats in the county.

“I would like to think that it is a constituency we have republicanised. On the day if we get our vote out, we will be grand,” he said.

If the reaction on the doorsteps of Cox’s Demesne – Dundalk’s first large council estate and a solidly Sinn Féin stronghold – is repeated elsewhere in the county, two TDs is definitely doable.

Ó Murchú talks about Adams’s rock-star status and this is clear to see from the greetings he receives as limps about on Thursday afternoon.

Asked what rocker his mentor most resembles, Ó Murchú joshes with Adams: “People have been talking about the Bee Gees lately but I am not sure he is too receptive to that jibe.”

The only hostile reception for Sinn Féin around this estate comes from a dog named Saoirse who goes for a canvasser on a path to a front door, prompting a hard dash from freedom.

“That’s the first dog called Saoirse that has ever attacked a republican, I think,” he says.

“He must not be a republican dog; he must be pretending to be a republican, a Fianna Fáil dog,” jokes John Connolly, a former IRA blanket man who now works for peace and his community.

On the doorsteps, the party’s workers hear little of support for Fianna Fáil or Fine Gael. One man tells Adams he is adamant he won’t vote for “Leo Martin”.

The constituent says that he is going to give his number two to Fitzpatrick, pointing to the Clann na Gael Gaelic club across the road from the estate, the sitting TD’s own club.

The appetite around here is a clear desire for change and to see Sinn Féin in government.

One of the canvassers out with Ó Murchú and Adams, Paddy Agnew, a former IRA member who was elected TD in this constituency during the 1981 hunger strikes, cannot understand the refusal of Fianna Fáil or Fine Gael to countenance coalition government with Sinn Féin.

“There is peace everywhere. The war is over,” he said. “What do you have to do? Ian Paisley wouldn’t be doing what they are doing. They need to get on with it.”