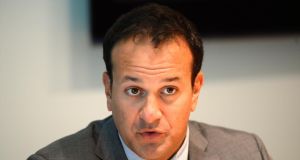 Minister for Health Leo Varadkar said there was no perfect abortion law and never would be. “We will always be challenged to amend and refine whatever law we have and so we should,’’ he added. Photograph: Cyril Byrne/The Irish Times

Minister for Health Dr Leo Varadkar has ruled out holding a referendum to legalise abortion.

He called for a “considered and careful’’ debate on the issue. “We need a real debate and a genuine attempt to find a consensus,’’ he said.

The Minister was replying in the Dáil to Independent TD Clare Daly, who moved a Private Member’s Bill repealing the eight amendment to the Constitution and legalising abortion in Ireland.

She said a referendum on the issue should be held with the other referendums planned for May of next year.

Introducing the Thirty-Fourth Amendment of the Constitution (Right to Personal Autonomy and Bodily Integrity) 2014, an emotional Ms Daly said the least that could be done was to ensure people were supported and helped when they experienced a crisis - and not stigmatised and cast out.

“Nobody of a present reproductive age has had a chance to vote on this matter,’’ she said. “That is absolutely ridiculous.’’

She said that “even from a basic democratic standpoint, people who can get pregnant now surely have a right to have a say in this’’.

Dr Varadkar said there was no perfect abortion law and never would be. “We will always be challenged to amend and refine whatever law we have and so we should,’’ he added.

He said Ms Daly’s Bill was flawed, adding it was not clear what the author intended by providing that the State would “acknowledge’’ the rights of all citizens to autonomy and bodily integrity. “The proposal is vague,’’ he added.

The Minister said the language employed by Ms Daly was “opaque and unsure’’ as to what it actually wanted the State to do.

“These points are all the more important in the context of a Constitution, a document laying down the fundamental legal structure of the State,’’ he added.

The Minister said he considered himself to be pro-life and he accepted that the unborn child was a human life with rights.

“I cannot, therefore, accept the view that it is a simple matter of choice,’’ he added. “There are two lives involved in any pregnancy.’’

He said for that reason, like most people in the country, he did not support abortion on request or on demand.

“But I also know that this is an issue where there are few certainties, there can be a conflict of rights and difficult decisions have to be made every day, sometimes to save a life, sometimes because the quality of the lives involved also need to be considered,’’ the Minister added.

He said speaking as Minister for Health, and also a medical doctor, “and knowing now all that I do now, it is my considered view that the eight amendment is too restrictive’’.

While it protected the right to life of the mother, it had no regard for her long-term health, he said.

“If a stroke, heart attack, epileptic seizure happens, perhaps resulting in permanent disability as a result, then that is acceptable under our laws,’’ he added.

Similarly, said Dr Varadkar, it forced couples to bring to term a child who had no chance of survival for long outside the womb, if at all.

He said he had been present at stillbirths. While they could be handled well and sensitively, he did not believe anything was served by requiring women or couples to continue with such pregnancies should they not wish to do so when there is no chance of the baby surviving.

But it was not his right to impose his views on others and the current Government had no electoral mandate to do so, the Minister added.

The House will vote on the Bill on Wednesday night.