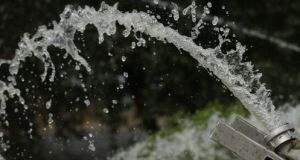 Fianna Fáil has been strongly attacked by Minister for Social Protection Leo Varadkar in heated Dáil exchanges on the water charges controversy.

He told Solidarity PBP TD Paul Murphy, who opposed water charges, he wanted to “congratulate’’ him on the role he had played in reducing Fianna Fáil to what it was now.

“The party of Lemass, the party that was once proud to stand up for things…that would do the right thing for the Irish people… is now in a position that it determines its position on water solely out of their fear of you and Sinn Féin,” he added.

Mr Varadkar, who was speaking during Opposition Leaders’ Questions on Thursday, said the original proposal to introduce water charges was brought forward in 2010 by the then FF-Green Party government.

Problem for FG spin is that their own minister confirmed last week that a fair deal was done https://t.co/zEIqpm7Fl3

Mr Varadkar said the “confidence and supply’’ arrangement with Fianna Fáil did not require a Minister to bring forward legislation which was contrary to European law, as advised by the Attorney General.

Mr Murphy said it was a matter of whether the Government was going to adhere to an agreement it had made.

Writing on the wall

“Minister, read the writing on the wall, it is over, you have lost, the sinister fringe has won, give it up, scrap the charges,” he added.

Replying to Sinn Féin deputy leader Mary Lou McDonald, the Minister said the Government would not introduce legislation which might expose Irish people to be liable to enormous fines.

He said Minister for Housing Simon Coveney and the Government had been very clear it would not facilitate legislation which was contrary to European law.

He said when the report from the Oireachtas committee considering the issue was signed off on, it would be sent to the Attorney General on whether what was proposed was contrary to European law.