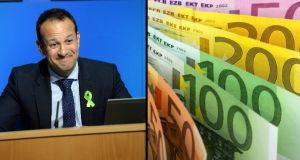 Mr Varadkar has launched a TV, radio, poster and online campaign with the message, Welfare Cheats Cheat us All. Photographs: The Irish Times

Mr Martin said the Minister had claimed there could be €500 million in savings from tackling fraud, but in a reply to Fianna Fáil social protection spokesman Willie O’Dea the Minster said the level of fraud was €41 million.

“The nation has been the victim in this instance of an extraordinary degree of fake news,” claimed the Fianna Fáil leader.

Mr Varadkar, who sat beside Taoiseach Enda Kenny during leaders’ questions in the Dáil, left the chamber when Mr Martin raised the issue.

Sinn Féin TD Donnchadh Ó Laoghaire noted: “It appears the Minister has either disappeared or decided he is going to personally investigate fraud himself.”

The Fianna Fáil leader criticised the “idea the department should sponsor an illegal campaign to tell untruths”.

He added that “it is important for Ministers to tell the truth and to refrain from engaging in fake news about specific issues”.

Mr Varadkar launched a TV, radio, poster and online campaign with the message, Welfare Cheats Cheat us All – which encouraged anyone suspecting someone of engaging in welfare fraud to report it to the Department of Social Protection.

Mr Martin claimed the subtext was that Mr Varadkar’s view was that “it’s all fraud and ‘I’m going to get them because I’m going to be leader’ or whatever”.

The Fianna Fáil leader said it was wrong to suggest there was €500 million in fraud when it was €41 million.

He said that for people on social welfare the Minister’s actions did not speak to the programme for government’s pledges for a “just and fair society”.

Mr Kenny said however that the department last year conducted 950,000 entitlement reviews and investigations across all its welfare schemes.

He said that showed there was in fact €506 million in control savings from jobseeker’s allowance, pension entitlements and housing benefits.

And he said Mr Coveney “has been promoting his record on the basis of a claim on new builds which inflates the true figure by 100 per cent”.

The Cork South-Central TD, a constituency colleague of Mr Coveney, referred to the two Ministers’ ambitions for the leadership of Fine Gael and said “clearly those Ministers are actively trying to promote their images and enhance their profiles”.

He said: “One can only conclude that Ministers are deliberately using misleading and untrue statistics, or they are failing to check their figures before issuing their various press releases.”

At the time Mr Kenny said the department estimated savings from fraud and control, not just fraud. Control measures are used to minimise overpayment either through error or fraud.

“It was based on a model developed with the CSO (Central Statistics Office) and also used in Australia as well as other OECD countries,” said the Taoiseach.

Mr Martin insisted “it stated fraud”. Mr Varadkar intervened and said “it was control and fraud”, but the Fianna Fáil leader rounded on him: “Come off it, Minister! You were caught out.”