Vaccination of ‘high risk’ citizens against Covid-19 to begin next week, Dáil hears

Minister for Health Stephen Donnelly has confirmed that Cohort 4, the fourth group of people on the priority list for Covid-19 vaccination, will begin to receive vaccines from next week. Video: Oireachtas TV 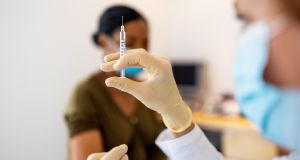 The Dáil was told by the Minister for Health that Ireland is ‘consistently’ close to the top of table of EU countries in terms of vaccination. File photograph: Getty

The fourth group of people on the priority for Covid-19 vaccination will begin to receive them from next week, Minister for Health Stephen Donnelly has said.

He told the Dáil that “Cohort 4 – those with underlying conditions putting them at very high risk – will begin to be vaccinated next week. The HSE is currently working through the details for how these patients will be contacted and where they will be vaccinated.”

The Minister said Cohort 4 is a “complex group” and “engagement is going on about how these patients will be contacted and where they will be vaccinated”. They will likely be vaccinated by GPs or in hospital settings, he added.

Mr Donnelly was updating the Dáil on the vaccination rollout.

The Minister also said “huge uncertainty” exists with delivery of AstraZeneca and the pharma company remained a “very serious concern in terms of their reliability” because of delays and “downward forecasting” of promised batches of vaccine.

Addressing Opposition criticism about missed targets for the vaccination of those aged over 85 and delays in delivery to GP practices, Mr Donnelly said the “vast majority” would be done by end of this week.

He told Sinn Féin health spokesman David Cullinane that approximately 65 GP practices with below 200 patients over the age cohort who were not combining with other practices will be contacted on Thursday and Friday and will get deliveries next week.

There is a group of 25 other practices with very small number of patients over 70 and the HSE is engaging with them. He said “there were some issues in the supply chain and the HSE is addressing them”.

Labour leader Alan Kelly called for publication of the weekly vaccination schedule, but Mr Donnelly replied that this is a “challenge”. He said that this week “in good faith” they said they hoped to vaccinate 100,000, but at the last minute AstraZeneca did not deliver the agreed amount.

“Unfortunately how that has been portrayed by some is that the HSE missed its target, the State missed its target, whereas in fact that’s not the case at all. If you publish the forecast at that level of detail that can change . . . it could cause a huge amount of concern among the public and erode trust.”

Asked by several TDs about the possibility of doing separate deals like other European Union states for the delivery of additional vaccine, Mr Donnelly replied that very few member states are doing separate deals. He cited Hungary, which he said is using a vaccine “not authorised by the European Medicines Agency”.

Ireland is, however, “consistently” close to the top of table of EU countries in terms of vaccination, he said. And the State has advance purchase deals for 18.5 million doses.

“The process we’re going through so far has given us access to a level of vaccine that would not have been possible if we tried to go on our own,” he said.

Mr Donnelly added that he would ask the vaccine taskforce about investigating legitimate mechanisms in parallel with EU process to secure validated vaccines. However, Fine Gael TD Eoghan Murphy said the Minister should not ask the taskforce but “demand we go out” and get separate supplies as the EU Commission had granted such permission. He said more than one million doses in Germany had not been used and 1.5 million in France.

Pressed about the use of AstraZeneca for over-70s, Mr Donnelly said the National Immunisation Vaccination Committee – which advises the National Public Health Emergency Team – is looking at the issue, but it might not make that recommendation.