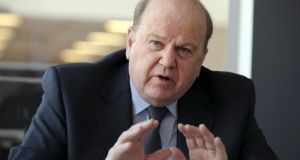 Minister for Finance Michael Noonan said he wanted to make it clear “the tax rates being quoted publicly this week are emphatically not the rate of tax paid by such companies or by any company on its Irish activities.

Wrong and misleading rates for taxes paid by the Apple corporation on its Irish activities were quoted at the US Senate investigations committee hearing, the Dáil was told.

Minister for Finance Michael Noonan said he wanted to make it clear “the tax rates being quoted publicly this week are emphatically not the rate of tax paid by such companies or by any company on its Irish activities.

“Ireland’s tax system is statute-based,” he added, “so there is no possibility of individual special tax rates for companies” and all companies resident in Ireland were charged a 12.5 per cent corporation tax rate on their Irish activities.

The Senate committee quoted taxes based on global profits rather than just Irish profits, as if such companies were tax resident in the State, which they were not.

“It is clearly wrong and misleading to attribute this rate of tax to Ireland,” he told two Labour backbenchers who questioned him about the international controversy that has focused attention on the State’s tax regime and reports that Apple had negotiated a tax rate of less than 2 per cent.

Companies not tax resident in Ireland “are no more chargeable in Ireland in respect of their entire profits than they are in the US. These company profit figures should not be used to assert special tax rates that simply do not apply here.”

It was “unfortunate that Ireland has been singled out in this way”. The ability of multinational companies to lower their global taxes using international structures reflected the global context in which all countries operated.

Mr Noonan said every country had its own tax system and “some multinational corporations, with the assistance of legal practitioners and tax advisors, have exploited the differences in these systems to their own advantage”.

He had examined the document produced by the US Senate committee. “It appears the rate that is being quoted is got as follows: the tax charged in Ireland on the branch activities in Ireland of companies that are not resident here on the one hand, is divided by the entire profit of the companies concerned, as if they were resident here, which they are not, on the other hand.

“It is clearly wrong and misleading to attribute this rate of tax to Ireland,” he added.

The Minister said tax management was an international business. “Very clever accountants and very clever lawyers are involved in it and they basically try to get into an unspecified space between the tax laws of two jurisdictions.

“Operating in that space, they find ways of avoiding the tax that otherwise would not have been payable.”