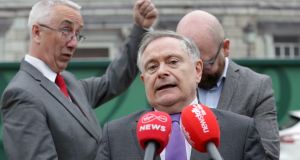 Labour leader Brendan Howlin said that Scouting Ireland would proceed with their normal camps this weekend, although the letter from Tusla recommended that the agency review the practice. Photograph: Laura Hutton/The Irish Times

Serious child protection concerns raised by Tusla in a letter to Scouting Ireland were not mentioned at a subsequent meeting it held with the youth organisation a week later, it has been claimed.

Labour leader Brendan Howlin asked in the Dáil why these safeguarding issues were not discussed with senior officials of Scouting Ireland if they were of such concern that Minister for Children Katherine Zappone had to publish the letter.

Mr Howlin also said that Scouting Ireland was going ahead with their normal camps this weekend, although the letter from Tusla recommended that the agency review the practice.

The child and family agency is now to conduct a full review into how the voluntary organisation supervises children and deals with disclosures of abuse after serious concerns were raised about current practices and found shortcomings in “live cases”.

Mr Howlin asked during leaders’ questions if there were new issues that had arisen in the scouting organisation or was it the ongoing child protection measures it was currently dealing with.

When Mr Coveney said this was an ongoing relationship, Mr Howlin replied “there’s nothing new”.

And he asked if the Government was saying that Scouting Ireland was not co-operating with Tusla on child protection issues.

The Tánaiste told him, “I’m surprised at the defensive tone of your questions”.

Ms Zappone told the Dáil on Wednesday she was publishing the letter because she had “serious worries” about the issues uncovered by the agency.

Mr Coveney said on Thursday “that is why the Minister has instructed that the chief executive of Scouting Ireland work with Tusla” to deal with these matters.

“If she wasn’t so concerned for the need for that work to continue she wouldn’t have said it.”

The letter was critical of the scouting body’s staff directly interviewing children over disclosures of alleged abuse when this should only have been done by Tusla and An Garda Síochána.

Mr Coveney said “the Minister is trying to act in a way that is transparent, open and responsible.” He said “we know there have been cases of children in totally inappropriate situations” linked to the past.

He added that “actions are being taken by Tusla to ensure that all reasonable steps are being taken to strengthen” child protection measures, including having sufficient numbers of adequately trained supervisors.

When Mr Howlin said that scouting camps would take place this weekend as normal, despite the letter’s recommendation, Mr Coveney replied that parents should ask reasonable questions.

They should seek assurances “that no overnight camp is taking place without an adequate number of trained supervisors and that each supervisor knows the exact steps to take if a child comes to them with a concern or if something happens.”