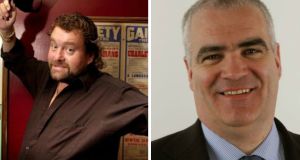 Tributes were paid in the Dáil to two “giants of public life” barrister and commentator Noel Whelan and entertainer Brendan Grace.

Fianna Fáil deputy leader Dara Calleary said they were “two very different men but both made enormous contributions to our nation’s political legal, media, social and cultural life and both have died too young”.

He said Mr Whelan was “very passionate about democracy and about people understanding and accessing that democracy”.

Referencing Mr Whelan’s election runs for Fianna Fáil, Mr Calleary said that “unlike a lot of political pundits he wasn’t afraid to put his name on a ballot paper and he was exceptionally proud of the history of this country and its potential and he was never afraid to challenge that potential”.

He said “his most important role was as husband to Sinead and Dad to Séamus,” and he also offered sympathies to his brother Michael Whelan, a Fianna Fáil councillor in Wexford.

He said Brendan Grace was immensely talented and had a “unique distinction of being able to connect to generations of much different characters from Bottler to Father Fintan Stack”.

Tánaiste Simon Coveney said they were both much loved personalities. He got to know Mr Whelan very well through the marriage equality referendum.

“He was somebody who had the courage to put his name forward for politics. He obviously had a very close connection with the Fianna Fáil party but that didn’t determine his commentary and his influence in many social change campaigns.”

He said he was somebody who made an extraordinary contribution to public life in Ireland and was “deeply respected across the political divide and also liked and someone who was trusted in terms of seeking his counsel and his advice”. His death at 50 was a tragedy for his family.

“Brendan Grace was also a giant. There are few people in this House who haven’t heard seen or been at a venue when he’s been entertaining, singing and making people laugh.”

His acting and talent has been a source of extraordinary entertainment for many decades.

The Dáil “recognises that two giants, both in terms of political discourse and broader entertainment have passed far too early in life and Ireland is lesser for that.”

Labour leader Brendan Howlin said “Brendan Grace brought boundless joy to millions of Irish people at home and abroad and indeed beyond the Irish family at talented actor, singer and comedian and he will be sorely missed.”

He was shocked at Mr Whelan’s death. He was “a countyman of my own” and he knew the Whelan family. “His father was a distinguished county councillor for Fianna Fáil in Co Wexford.

He said Mr Whelan was somebody of “great intellect, great incisiveness whose views you certainly listened to and was able to marshal words in written form to great effect. He will be really missed across public affairs in this country.

He was the driving force behind the Kennedy summer school that brought a lot of fresh political thought to New Ross during the summer and he hoped it would continue in his memory.