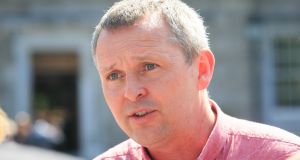 Seán FitzPatrick has been accused of engaging in “rotten, corrupt activities’’ by Solidarity TD Richard Boyd Barrett in the Dáil.

The Dún Laoghaire TD was speaking in the House on Thursday with full parliamentary privilege.

He was responding to criticism of the Office of the Director of Corporate Enforcement (ODCE) following the dismissal of charges against the former Anglo Irish Bank chairman.

Mr Boyd Barrett claimed Mr FitzPatrick walked free because of a set-up and not a blunder. “This stinks to high heaven,’’ he added.

Leas Cheann Comhairle Pat “The Cope’’ Gallagher intervened to say he was referring to a trial and should “refrain lest there might be consequences’’.

Mr Boyd Barrett said: “There is a direct link between Seánie FitzPatrick’s rotten, corrupt activities and Anglo Irish Bank and the families this week being sent to Garda stations or are sleeping in parks because there are no homes.’’

He claimed the establishment had “contrived and conspired’’ to ensure he walked free.

“It is an absolute scandal,’’ he added.

Mr Boyd Barrett said an individual with no previous experience of criminal prosecution had been put in charge of the case.

He said ministers, gardaí, judges and the Director of Public Prosecutions knew there were problems and nothing was done.

“Then, he walks away free because of apparent blunders by one scapegoated individual,’’ he added.

Earlier, Minister for Jobs, Enterprise and Innovation Mary Mitchell O’Connor said she might replace the ODCE.

The Minister said she had ordered a report from current director Ian Drennan, on what had gone wrong, and expected it no later than June 23rd.

“If the report leads me to conclude we need an entirely new model, then so be it,’’ she said.

“We owe it to those who suffered during the crash to never, ever allow anything of this nature to happen again.’’

The Minister said “nothing was off the table’’ in her review of the report.

Ms Mitchell O’Connor said she did not accept what happened was entirely an issue of the funding and resources of the ODCE.

Ms Mitchell O’Connor said she was deeply frustrated and shared the disappointment and annoyance felt by members of the Oireachtas and the public following the ruling by Judge John Aylmer on Tuesday.

The judge, she said, had considered as a result of shortcomings in the investigative process undertaken by the ODCE he could not allow the charges go before the jury for decision.

He directed the jury to acquit Mr FitzPatrick of all charges against him, she added.

The Joint Committee on Jobs, Enterprise and Innovation wrote on Thursday to the ODCE inviting the body’s head of office Ian Drennan to appear before it to discuss issues arising from the collapsed trial.