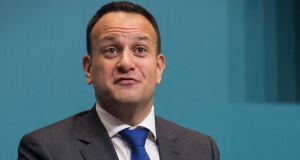 The Taoiseach Leo Varadkar acknowledged that the rough sleeping figures were “very disappointing”, but he said “this isn’t the highest ever by any means”. Photograph: Gareth Chaney/Collins

The Government has rejected a Sinn Féin call for tax relief for people paying rent and for a three year freeze on rents.

Taoiseach Leo Varadkar said the Government would not single out one group. “It’s not a proposal we’re supporting,” he told Sinn Féin leader Mary Lou McDonald in the Dáil.

“Rather than just giving income tax cuts to people who are renting, we are giving them to all workers because other people struggle with other bills.

Ms McDonald had repeated a call she has made for tax relief for those renting and a freeze on rents.

She said the Government had been in place for seven years and she told Mr Varadkar that “it may not have occurred to you - but your plan is not working”.

She said “you have failed spectacularly” as she highlighted the rise in the number of people sleeping rough.

She said social housing is being constructed at a snail’s pace.

The Central Bank had advised would be homeowners to hang on until new houses were built but they are only going to “arrive at some undefined point in the future”.

She said thousands of people demonstrated last weekend about the homelessness crisis and called for the Government to change tack. People are “frankly fed up waiting for you to get your act together.

“People are being screwed day in day out with runaway rents,” she said.

Mr Varadkar acknowledged that the rough sleeping figures were “very disappointing”, but he said “this isn’t the highest ever by any means. It was higher a year ago and it was higher four years ago but it does represent an increase on the last count in September”.

He said nobody had to sleep rough who did not have to.

The Government had allocated an extra €60 million for emergency accommodation and 203 extra beds would be provided. He said 5,000 new homes had been built this year and unemployment had dropped to a 10 year low of 5.3 per cent.

But he did not support tax relief for renters alone.

“And rather than just giving tax relief to one group which is the Sinn Féin proposal we’re going to give it to nearly everyone who’s working, over a million people.”