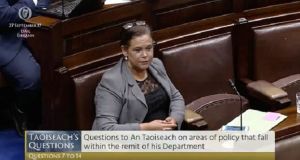 Mary Lou McDonald: the Taoiseach said the only time Ms McDonald was not scripted was when she was interrupting Government speakers

Leo Varadkar and Sinn Féin deputy leader Mary Lou McDonald traded insults in the Dáil on Wednesday after the Taoiseach accused her of scripting the questions she put to him.

Mr Varadkar accused Ms McDonald of being very cranky during the sharp exchange, in which the Dublin Central TD accused him of being “facile and dismissive on important issues.’’

There back and forth between the two in the House for the second day in a row again highlighted political tensions between Mr Varadkar and Sinn Féin.

The exchange began after Ms McDonald accused the Government of failing to tax the banks.

Ms McDonald had claimed the banks, although back in profit, were let off “scot-free’’ when it came to paying corporation tax.

“This is happening at a time when families still struggle to keep the wolf from the door to pay their bills,’’ she added.

The Taoiseach began his reply by sarcastically complimenting her “on a flawless delivery’’ of her script.

“Pauses, intonation, everything was absolutely perfect as always,’’ he added. “I hope she did not spend too much time practising this morning.’’

Later, the Taoiseach said the only time Ms McDonald was not scripted was when she was interrupting Government speakers.

Ms McDonald asked Mr Varadkar to say how much tax the State was forgoing from AIB under a “sweetheart’’ deal with the Government.

Mr Varadkar said a bank levy had been introduced to ensure a source of revenue. “Between now and 2021 the bank levy will bring in €750 million,’’ he said.

The Taoiseach repeated the Government would balance the books in next month’s budget. He said the State’s debt was about €200 billion, with the bank bailouts accounting for about €30 billion.

The Taoiseach said it cost about €6 billion annually to service the national debt which could be spent on “health, housing, education and everything else” had previous governments balanced the books.

This was why, Mr Varadkar said, he planned that his first budget as Taoiseach would balance the books so that the children of the future were not saddled with additional debt and politicians did not have to choose between debt management costs and improving services.

Mr Varadkar and Ms McDonald later engaged in sharp exchanges on Northern Ireland. The Taoiseach said politics was about compromise and Sinn Féin would have to make compromises to allow an Executive to be established.

Ms McDonald said the Taoiseach should set out where the compromises should be made.

When Fine Gael TD Alan Farrell, who was chairing the proceedings, said the Taoiseach should not be interrupted, Mr Varadkar said interruptions were “the constant pattern’’ of debate in the House.

“At least it is not scripted,’’ said Ms McDonald.

Mr Varadkar said there was no executive or assembly in Northern Ireland because of Sinn Féin’s attitude. “They are constantly hectoring and making smart aleck remarks,’’ he added.

Level 5 enforcement: Fines to be introduced for house parties and breaking 5km rule

1 Level 5 enforcement: Fines to be introduced for house parties and breaking 5km rule
2 Life under Level 5: What will the next six weeks look like for the State?
3 Covid-19: State moves to Level 5 for six weeks with hopes of ‘meaningful’ Christmas celebrations
4 Cork city centre is hit by flooding as river Lee bursts its banks
5 Six weeks of Level 5: Non-essential shops to close, no visitors to homes and a 5km travel limit
Real news has value SUBSCRIBE