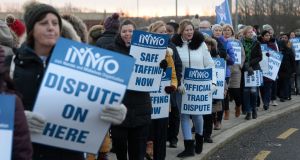 Tánaiste Simon Coveney has urged a return to the Labour Court for talks to avoid two more days of strike action by nurses next week.

As nearly 40,000 nurses and midwives prepared for more intensive strike action next week and 6,000 psychiatric nurses began an overtime ban from Thursday, Mr Coveney said “we do want to talk”.

“We want the Labour Court to be able to do its job” and to work with management and Government and nursing unions “to make recommendations as a basis for a way forward that can avoid the impact of strike action for two days next week,” he said.

Members of the Irish Nurses and Midwives Organisation (INMO) staged the first in a series of six 24-hour work stoppages on Wednesday as part of a campaign to secure pay parity with other graduate-entry healthcare professional staff such as physiotherapists. The nurses maintain that such increases are needed to tackle recruitment and retention problems in the health service.

Labour leader Brendan Howlin said that “every single public sector agreement had to deal with anomalies in specific sectors” that resulted in “side deals”.

Mr Howlin said the recruitment and retention crisis was acknowledged and he insisted that “special arrangements could be put in place within the confines of the pay agreement”.

Mr Howlin said the fact it was the second strike in 100 years demonstrated the seriousness of the situation.

He said the Government should talk to the Irish Congress of Trade Unions (Ictu) on the issue. Mr Coveney said they talked to Ictu all the time and there were a lot of “conversations” going on in a bid to avert further strike action.

However, he insisted it had to be done within the confines of the public sector agreement that the Government and the Irish Nurses and Midwives Organisation (INMO) and other unions had signed up to.

Mr Coveney insisted the Government had great respect for nurses and the work they did in often very difficult situations and he thanked them for their cooperation in Wednesday’s strike action to keep essential services running.

But he confirmed to Fianna Fáil deputy leader Dara Calleary that the Government was taking legal advice about pay and pensions in relation to strike action that was “consistent with the pay agreement”.

Mr Calleary criticised the Government saying it was claiming it respected nurses but was considering docking their pay and pensions.

Mr Calleary asked “are you just putting your head in the sand once again?”.

Rejecting the criticism Mr Coveney said the Government “wants to be fair and open and imaginative but we have to be able to afford any solution we sign up to”.

Solidarity TD Ruth Coppinger highlighted the concerns of nurses on the picket lines, who spoke of nursing “becoming a passport” not a career in Ireland and of how the Government could pay bondholders but not nurses.

She warned that “hospital wards have become frankly dangerous” as she pointed to one case where three midwives were looking after 23 mothers and their babies.

Mr Coveney said that Ms Coppinger was demanding that more money should be given to everything but claimed she had no answer for where the money should come from except “take it from the super wealthy”.