Tánaiste sidesteps remarks about ‘bank of mum and dad’ 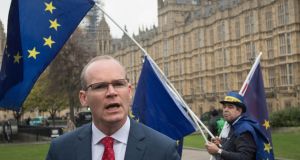 Tánaiste Simon Coveney said that while the supply of housing was still not enough, it was increasing steadily. Photograph: Stefan Rousseau/PA Wire

Tánaiste Simon Coveney refused to be drawn when challenged in the Dáil about comments by Taoiseach Leo Varadkar on parents helping their children with deposits to buy a home.

People Before Profit TD Richard Boyd Barrett said that “vast numbers of people are puzzled and infuriated about the Taoiseach’s advice to go to the bank of mum and dad to deal with the impossible task of coming up with a deposit or finding affordable housing”.

He said: “The mythical bank of mum and dad does not exist except for a pampered few.”

Mr Varadkar sparked controversy when he suggested that homebuyers could get financial assistance for their deposit or could emigrate or move back home to save the money.

Mr Boyd Barrett criticised the Government’s plan for local authorities to offer secure low-interest mortgages for up to 30 years and said a teacher earning €35,000 might get a mortgage for €270,000 but would have to have a €27,000 deposit.

But the Dún Laoghaire TD said that even with such a deposit they had no chance of buying a house in Dublin for €270,000. Mr Boyd Barrett said houses in Dublin were costing €350,000 and in Dún Laoghaire they were at least €600,000.

But Mr Coveney, who made no reference to the Taoiseach’s comments earlier this week, said there were currently 600 houses priced under €250,000 listed for sale in Dublin this week on Daft.ie.

And he hit out at Mr Boyd Barrett for dismissing the schemes to help first-time buyers acquire a home. The Tánaiste said that while the supply of housing was still not enough, it was increasing steadily.