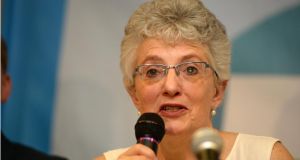 The formal recognition of the identity of transgender people was a mark of the growing maturity of Irish society, Tánaiste Joan Burton told the Seanad. “It is an element of the programme for social reform which has been progressed by the Government and it is the third of three pieces of legislation in the civil registration area that I have brought forward as Minister for Social Protection,” she said.

Ms Burton was introducing the Gender Recognition Bill 2014. She said the number of people directly affected by the legislation would be small, but it had a deep significance for those who would, for the first time, have their preferred gender formally recognised by the State for all purposes. “This significance extends to families, friends and communities of people who are transgender and who will avail of the new birth certificates to be made available,” Ms Burton said.

Averil Power (FF) said that while she welcomed the legislation, she was concerned it did not go far enough. “Many of the countries that originally legislated in a more conservative fashion are now re-examining their legislation with a view to being more progressive,” she said.

Hildegarde Naughton (FG) said while concerns had been raised about the legislation, it was to be welcomed. “It is nearly eight years since the High Court first ruled on this issue and I am happy to see the Government moving to rectify a glaring anomaly in the law,” she added.

Katherine Zappone (Ind) said she acknowledged the role played by the Tánaiste and civil servants in preparing the Bill. “The Bill would not have happened without her or her willingness to listen, with empathy, to the aspirations, hopes, pains and the struggle of trans-people and their families,” she added.

She added that it was regrettable it had taken successive Irish governments more than 20 years to legislate for gender recognition.