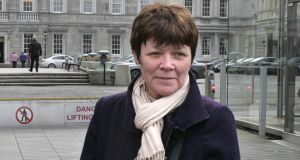 Joan Collins: Independent TD said the Minister for Education “insists on treating apprentices as students but they are not students. They cannot avail of student grants or other financial assistance available to students.”

Minister for Education Ruairí Quinn will meet the Union of Students in Ireland (USI) to discuss the college fees levied in the budget on apprentices, Tánaiste Eamon Gilmore has pledged.

But he said apprentices earned between €300 and €700 a week and it was “not unreasonable that where there is a student charge, those who are part of the education system and are getting paid would contribute to the student charge”.

He was responding to Independent TD Joan Collins who complained that Mr Quinn had failed to meet the Technical, Electrical and Engineering Union (TEEU) and USI representatives about the charge, ranging from €833 to €1,433 a year.

Apprentices
Until now apprentices were not charged, despite an attempt in 2004, but she said the Government had introduced the fee in the October budget without any consultation.

She said the Minister for Education “insists on treating apprentices as students but they are not students. They cannot avail of student grants or other financial assistance available to students.”

The Dublin South-Central TD said that Fás had paid the money in the past and its replacement Solas should pay it now, and not the apprentices.

Mr Gilmore said he understood Mr Quinn would meet the USI, but he made no reference to the TEEU. He said “apprentices continue to be paid while they are in the education part of their apprenticeship”.