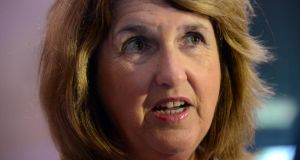 The Tánaiste and Labour leaderJoan Burton: said gardaí were being trained again in Templemore, unlike when Fianna Fáil was in power. Photograph: Cyril Byrne/The Irish TImes

A Garda presence was the only way to deal with anti-social behaviour in city streets, Tánaiste Joan Burton told the Dáil amid heated exchanges with Fianna Fáil justice spokesman Niall Collins.

Mr Collins had criticised anti-social behaviour and drug- pushing in Dublin city centre. Ms Burton responded that he seemed to be unaware of what gardaí were doing there. They were going door-to-door to residents and businesses, she said. “That presence, I welcome,” she added. She said the Garda Commissioner was focusing on that strategy to reassure people.

Rounding on Mr Collins, Ms Burton said gardaí were being trained, unlike when Fianna Fáil was in power. “You closed down Templemore,” she said, “you put the shutters on Templemore.” A Fianna Fáil-led government had also cut Garda pay, she said.

Mr Collins said those who lived, worked or socialised in Dublin wanted to live the experience of a modern and vibrant city.

Unfortunately, there was a dark side to the city, as witnessed by the death of Jonathan Corrie in the shadow of the front gate of Leinster House. There were also media reports of people taking drugs at the rear of the Leinster House complex in broad daylight, he said. The Dublin Business Association had told a tale of crime in Dublin city centre which was quite shocking.

“They tell us about shoplifting, drug-taking, handbag-snatching, aggressive begging,’’ said Mr Collins. He said the association pointed out that the number of gardaí in the city centre had fallen by about 12 per cent and that seven of the eight stations on the north and south sides of the city centre were down about 160 gardaí.

The association had also claimed, Mr Collins added, that the operation of the Garda roster was hampering the operations of its members’ businesses and how members of the public lived and worked in Dublin city centre. To back this up, the association conducted an independent survey. This revealed that 87 per cent of people believed there should be a greater Garda presence in the city centre.

Ms Burton expressed sympathy with Mr Corrie’s family and friends. Without a doubt, she said, anybody who had lived or spent time in Dublin would know that, over a long time, there had been a significant problem with drugs.

In recent days, she said, the Government had given the go-ahead to a significant supplementary estimate for gardaí to cover overtime and investment in additional resources.