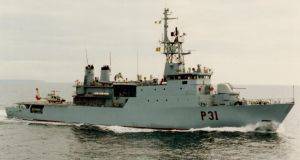 Tánaiste Simon Coveney: The Naval Service has ‘taken over 17,000 people from the water’ in the Mediterranean

Independents4Change TD Clare Daly who claimed “the service is in meltdown”, said that for the first time in its history the service was unable to do its core function of sea fisheries protection.

She suggested it was time suspend the State’s participation in Operation Sophia and bring staff home to “protect our sea fisheries and coastal waters”.

She was commenting after it emerged that senior Naval personnel were ordered to end the 72 hours notice personnel normally got to provide short-term relief on ships and that personnel would have to be ready for duty without warning.

The order was subsequently rescinded.

The Dublin Fingal TD said that ships normally crewed by 44 personnel were putting to sea with 34 and she asked if it was time to bring the crew members home from Operation Sophia.

Mr Coveney, who is Minister for Foreign Affairs, said that fisheries protection “is not the limit of what we ask Naval Service personnel to do”.

He said he was proud of their involvement in Operation Sophia. “They have taken over 17,000 people from the water, many of them children who would not be alive today were it not for the professionalism and intervention of the Naval Service.”

He said Ireland’s role had shifted from a bilateral relationship with the Italian coastguard in the Mediterranean to a collective EU effort but “our role in the operation is to participate in a humanitarian search and rescue mission, rather than in an offensive or war-going capacity”.

Ms Daly also asked if the Tánaiste had confidence in the Chief of Staff of the Defence Forces in light of the crisis within the service.

Ceann Comhairle Seán Ó Fearghaíl said “making a general accusation is one thing but an accusation targeted at an identifiable person outside the House who cannot defend himself of herself is not in order”.

Mr Coveney said it was not the first time Ms Daly had targeted individuals who did not have an opportunity to defend themselves in the House.

He said: “I have absolute confidence in the Chief of Staff of the Defence Forces whom I know well and with whom I worked while I was Minister for Defence.”

There were recruitment and retention issues, in part because of the skill set of personnel who were being targeted by the private sector.

The Government is examining the issue in detail and will consider all recommendations.