Simon Coveney says there are positives from Arlene Foster’s statement 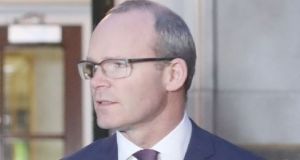 The Tánaiste Simon Coveney expressed the hope that the talks could be brought around again and said there were positives in the statement of DUP leader Arlene Foster. File photograph: Niall Carson/PA

Tánaiste Simon Coveney has rounded on Fianna Fail leader Micheál Martin in the Dáil over his comments in the wake of the collapse of Stormont talks between Sinn Féin and the DUP.

Mr Martin had criticised both Sinn Féin and the DUP for the failure of the talks, accused the Government of inexperience and naivety and claimed that the British Irish government relationship was not as good as it could be.

Mr Coveney said there had always been a long standing agreement between Fine Gael and Fianna Fáil on the approach to the North and he described Mr Martin’s commentary as unhelpful.

In the past the parties had taken a bi-partisan approach to the North and avoided public disagreement.

He said Mr Martin “in my view doesn’t seem to understand what is going on” and he suggested that if Mr Martin had an issue he should talk to people rather than tweeting criticisms.

Fianna Fáil’s Dara Calleary riposted that “you’re pretty good at a tweet yourself”.

Mr Coveney replied: “Not on this issue I’m not.”

The Tánaiste also expressed the hope that the talks could be brought around again and he said there were positives in the statement of DUP leader Arlene Foster.

He was responding to Sinn Féin finance spokesman Pearse Doherty who had criticised Fianna Fáil as he raised the issue of the talks’ collapse and said that his party had engaged and worked in good faith on the talks.

“We stretched ourselves,” he said adding that Sinn Féin believed it had a deal, as did the Irish and British governments but “the DUP failed to close that deal”.

Mr Doherty said “these issues are not going to go away” and insisted that they did not threaten anyone. He added that “rights for all do not mean less rights for some”.

Hitting out at Fianna Fáil he said that two years ago Mr Martin had called for the Northern institutions to be suspended. Mr Doherty said it was a “disgraceful” and political attack.

Mr Doherty thanked the Tánaiste and his officials for their efforts with the talks and said “we are very grateful for that”.

He asked Mr Coveney if he had made it clear to the British government that direct rule is not an option.

The Tánaiste said there was no appetite for a return to direct rule in Northern Ireland. It was not a place where the Irish or British governments wanted to be. He did not believe it was where the DUP wanted to be either “even though that is what they effectively requested yesterday”.

He said his understanding was that Irish was part of the diversity of Northern Ireland and those for whom it is part of their identity do not want to force it on anyone else.

Mr Coveney said that during the talks particularly over the last eight nights, there had been respect for that diversity and difference.