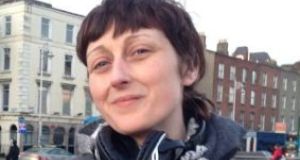 Tánaiste Frances Fitzgerald said she was “totally disturbed and appalled” by reports that Garda CCTV footage of a distressed young woman who later died by suicide was posted on Facebook.

“Of course, our thoughts are with that young woman’s family, given the appalling and very sad sequence of events.”

Ms McDonald asked in the Dáil that the Tánaiste would “shed light on the accountability that will be held for the life of Dara Quigley”, a journalist and blogger who died by suicide on April 12th.

Ms Quigley had been detained by gardaí some days previously under the Mental Health Act.

Ms McDonald said “she had been walking naked in a Dublin street when detained. Garda CCTV footage of this detention was posted on Facebook, a really deplorable and revolting turn of events, and something that has brought great hardship to her family and which clearly brought very great distress to Dara.”

The Sinn Féin TD said: “We mark her passing. When we talk about Garda culture, reform and accountability, I suppose this is the rawest end, the sharpest end, of a deplorable culture of humiliation and disregard for human beings.”

The Tánaiste said “everybody will be totally disturbed and appalled by the story that has been reported in the media and actions are following on from that”.

Solidarity TD Mick Barry said “very serious questions have been raised about the Garda Síochána and its treatment of the most vulnerable in society.”

He raised concerns about the lack of “dual diagnosis” services where psychiatric and addiction problems were treated together “in a professional and properly funded manner”.

He said Ms Quigley “suffered from and struggled with mental health problems and addiction. She received help from many agencies but what was available was not sufficient”.

He asked if there was a legislative path to addressing the issue. Minister of State for Health Helen McEntee, who offered her condolences to Ms Quigley’s family and friends, said it was “a terrible situation and what happened consequently was deplorable”.

She said dual diagnosis was not an issue that had been dealt with in the past.

“We know that in a significant number of suicides there is a link between drug or alcohol use as well”.

Ms McEntee said work was well under way on a clinical programme was being developed on the issue.