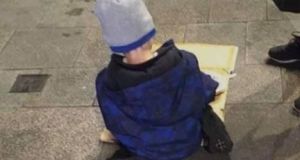 The photo of Sam (5) shown eating his dinner from a sheet of cardboard on a Dublin street this week. Image: The Homeless Street Cafe/Facebook

Tánaiste Simon Coveney said he was “angry” that child homelessness was continuing, describing as unacceptable the sight of a five-year-old child eating his dinner from a sheet of cardboard on a Dublin street this week.

A photograph of the child, identified only as “Sam”, was posted on Facebook by charity group The Homeless Street Cafe which explained the young boy had to eat his dinner of cabonara while sitting on the pavement.

Sinn Féin deputy leader Pearse Doherty described it as a “national shame” and said that more than 10,000 people, including over 4,000 children were now homeless.

Mr Coveney said the situation was unacceptable and “no five-year-old child should be eating his or her dinner from a piece of cardboard on the street”.

He said Ireland was a country that did not accept this and it was right that the issue was being raised.

“It makes me angry that the supports being put in place are not succeeding in ensuring that little boys like Sam do not find themselves in the position Sam was in a few nights ago.”

But Mr Coveney insisted that progress was being made on homelessness.

Mr Doherty said The Homeless Street Cafe made clear Sam’s mother “is trying her best to provide nutritious home cooked meals for her children but like so many parents of the homeless children of this State they live in emergency accommodation that strictly forbids them cooking meals for their children”.

He added that “this is Sam’s life, without a home or the comfort and security that should be a right for every child in this State.

“Sam is just one of thousands of children who are living in emergency accommodation in Ireland.”

The Donegal TD said this was the life of 4,000 children “who have been condemned to this type of nightmare” when the only place children should be at that hour of night is “ safely tucked up in their beds in homes with their families”.

He said the “moral stain of child homelessness in Ireland is creating a lost generation. Children who are having their childhoods stolen from them right before our eyes”.

Mr Coveney acknowledged that it was “unacceptable but he said “nobody has a moral superiority on this issue”.

The Government continued to prioritise homelessness and housing. He said that he as minister for housing introduced rent pressure zones to limit rent inflation and at least 60 per cent of rental properties in the State were subject to these provisions.

But he said “we need to ensure that Sam and little boys like him have security, safety and predictability in terms of their parents having a safe tenancy or a home of their own in which to look after their families. This is what we are working towards”.