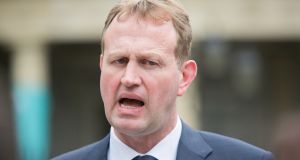 The State urgently needs to ratify a protocol to the UN Convention Against Torture to convince international colleagues that it should have a seat on the UN Security Council, the Dáil has heard.

Fianna Fáil justice spokesman Jim O’Callaghan made the comments on Thursday, noting how the State had signed the Optional Protocol to the Convention Against Torture 11 years ago but had yet to ratify it.

The protocol provides for inspections of places of detention such as Garda stations, residential care settings for people with disabilities and nursing homes for the elderly.

Mr O’Callaghan pointed to the Government’s launch this week of its campaign to be elected as a member of the Security Council for 2021 and 2022.

“We’ve informed colleagues that we are a country that complies with the highest standards of human rights and general international standards,” he said.

“We’re in a situation in this country where [for the] very many people detained in police stations, in care institutions . . . we need a mechanism to provide protection for them.”

He said there needed to be urgency on the issue and there had been no real explanation as to why the protocol had not yet been ratified.

It was “essential that we ratify the optional protocol that was signed in 2007”, he said.

Minister for Justice Charlie Flanagan said he expected progress on the issue by the end of the year.

He said his department was preparing the Inspection of Places of Detention Bill, which will ratify the protocol.

He said the heads of the Bill will be published in the autumn and the legislation should be debated and passed by Christmas.

Mr Flanagan said his officials had had discussions with the Irish Human Rights and Equality Commission about its research on the issue and will this month meet the Inspector of Prisons to discuss the future role of that office as part of the implementation of the protocol.

The Minister said that “my department is engaged with stakeholders in relation to the ratification of this instrument”.

The UN Committee Against Torture has noted that existing bodies such as the Health Information and Quality Authority (Hiqa) currently do not systematically visit Garda stations, residential care settings for people with disabilities or nursing homes.

Mr Flanagan added that there were responsibilities in this regard for areas outside of the Department of Justice.

He said there had been discussions with other departments, “but it’s a matter for each of those departments and their Ministers to determine what facilities fall within their remit”.