Standing ovation for Jack Charlton in the Dáil

The Dáil gave a standing ovation to the late Jack Charlton who was described as "the son of a miner, but who's contribution was major." Video: Oireachtas 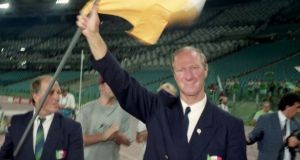 Jack Charlton waves to the Ireland fans after the quarter-final loss to Italy at the 1990 World Cup. Photo: Billy Stickland /Inpho

The Dáil gave a standing ovation in tribute to the late former Ireland manager Jack Charlton on Thursday evening.

Almost all TDs were in attendance in the auditorium of the Convention Centre, Dublin where the House is sitting for social distancing purposes.

The Ceann Comhairle said former minister of state for sport Brendan Griffin had proposed the tribute at the Dáil business committee.

He described Charlton as “ a larger than life figure who brought us great joy and community spirit in Ireland in the 1990s; a no-nonsense English man who united us in a feeling of national pride and self-esteem, for which we will always be grateful; the son of a miner whose contribution was major”.

“Let us rise and salute the late Jack Charlton,” the Ceann Comhairle said and the house rose for a prolonged round of applause.

The ovation follows a national outpouring of sympathy and nostalgia for the heady days of soccer when “Big Jack” led the Irish squad to the 1988 European Cup finals and two World Cups in a row - the quarter finals in the 1990 campaign and the 1994 competition.

His funeral takes place on Tuesday at West Road Crematorium in Newcastle but because of social distancing only 20 people will be able to attend the service.