Government under pressure after defeat on vote over Defence Forces pay, conditions 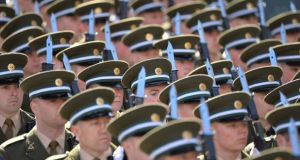 Garda members could be paid up to €1,000 for being on duty during the visit of US president Donald Trump while the 497 military personnel also on duty received €20 after tax for a 24-hour shift, the Dáil was told. File photograph: Alan Betson/The Irish Times

The Government is under increasing pressure to publish the Public Pay Commission report on Defence Forces terms and conditions amid an ongoing crisis over pay, recruitment and retention.

A 90-minute Dáil defence questions session was devoted entirely to the critical state of the organisation, while the Government was later defeated by 79 votes to 38 after debate on a Fianna Fáil private member’s motion calling for the full restoration of military allowances to levels before the economic crisis.

The party’s defence spokesman Jack Chambers said Defence Force members were leaving the organisation to join An Garda Síochána. Garda members could be paid up to €1,000 for being on duty during the visit of US president Donald Trump while the 497 military personnel also on duty received €20 after tax for a 24-hour shift, he said.

He said it was unacceptable that the State continued to stand over such a disparity for people providing protection.

But Minister of State for Defence Paul Kehoe said the vast majority of military and gardaí engage in “dissimilar” duties on a day-to-day basis, fill different roles and have different pay structures. He said the current military allowance was €23.81 for each day on duty of less than 24 hours and €47.59 for a 24-hour duty.

He also told the Dáil there were 8,828 personnel in place at the end of April while “in an ideal world” they would have a force of 9,500.

Mr Chambers accused Minister for Public Expenditure and Reform Paschal Donohoe and Mr Kehoe of engaging in a “cycle of waffle” after Mr Kehoe repeatedly stated it was Mr Donohoe’s responsibility to publish the commission’s report as it was done at his behest.

“It is not my report and it is not my memo,” Mr Kehoe said. He added that it would be brought to Cabinet shortly.

Mr Chambers challenged Mr Kehoe to publicly state he opposed the report amid major concern after leaks suggested it recommended that a private with three years’ experience would receive 96 cent a day before tax as military service allowance.

In the Dáil on Wednesday, Taoiseach Leo Varadkar acknowledged that pay was an issue for a lot of Defence Forces members but said it would simply not be right or fair to single out and restore Defence Forces pay and pensions fully ahead of everyone else in the public service.

He said the public sector pay bill was nearly €18 billion a year and a 2 per cent increase would be €360 million as he highlighted criticism from the Irish Fiscal Advisory Council that spending had increased too fast.

But during defence questions on Thursday Independent TD Mick Wallace said the military were already singled out because CSO figures showed 85 per cent were earning less than the average industrial wage and were the “lowest-paid workers in the public service”.

Fine Gael TD Bernard Durkan suggested that, given the military’s unique responsibility for responding to national emergencies and disasters, there should be a mechanism where the most serious issues presented by the Defence Forces might be addressed in the shortest possible time.

Mr Kehoe said the CSO figures were the reasons he had asked the Minister for Public Expenditure to prioritise the defence sector as a matter of urgency and requested that it be done through the pay commission.