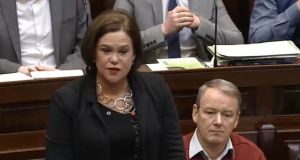 “Women don’t demand abortion,” she said. “They don’t go to a clinic and flippantly after an indiscretion demand an abortion. Can I make an appeal that the debate does not become so debased” that such phraseology is used, she asked.

Ms McDonald made the comment in the Dáil on Friday during a debate on the Thirty-Sixth Amendment of the Constitution Bill 2018, which would pave the way for the abortion referendum.

Ms McDonald reiterated her view that the Eighth Amendment should never have been placed in the Constitution. “It was a mistake,” she said.

The same dogma had produced the infamous Magdalene laundries, where single women who had children were placed.

“That Ireland is gone and good riddance,” she added. “The Eighth Amendment must go.”

Ms McDonald said there should be no more Savitas and women known to the public by way of letters in the alphabet.

Former Sinn Féin leader Gerry Adams commended the Government on the proposed wording for the referendum, placing women’s health with the Oireachtas and the Government, where it belonged.

“The State has a responsibility to support women,” he added.

He said abortion was a reality, with women travelling abroad to secure them.

In the last 40 years, it was estimated that 170,000 women had travelled abroad for an abortion, he added.

He asked if people wanted this to continue, or to have a mature and compassionate society.

Sinn Féin TD Eoin Ó Broin said his party would discuss the 12-week limit proposal in the next few weeks, and hoped to be able to persuade his party colleagues to support this.

The time had come, he said, to trust women. “Finally, after decades of denial, we have decided we are going to trust women,’’ he added.

He said every family’s individual decision must be respected.

Labour TD Jan O’Sullivan said the Netherlands had one of the most liberal regimes, but one of the lowest rates of abortion, because of the availability and use of contraception. She said the Dáil needed to reflect on what would happen if the amendment was not repealed.

“We know there are thousands and thousands of Irish women who had terminations since 1983,’’ she added.

It had been estimated nine women travelled every day to another country to have a termination of their pregnancy. “That is not going to change,’’ Ms O’Sullivan added. “All the evidence suggests that we will continue to have the same kind of termination statistics in this country as other comparable countries.’’

Ms O’Sullivan said there was abortion in Ireland. “We just don’t have it on the soil of Ireland,’’ she added.

Independents 4 Change TD Mick Wallace acknowledged there were many who believed women should not be allowed an abortion in the case of rape.

“But I ask these people to imagine themselves in the shoes of such victims,” he said.

“Imagine the waves of nausea and vomiting, the feeling of complete and utter contamination, the pain of vaginal penetration or vaginal ruptures and torn skin, bleeding and infection.

“But also the pain of the restraining, the hitting, the punching, the choking. Imagine then finding out you’re pregnant. Now imagine you’re 14 years old, the same age as the girl at the centre of the X case. Imagine the psychological trauma of carrying that child to birth.”

Independents 4 Change TD Clare Daly said she found it strange, in some ways, how the debate had moved since she and others introduced an abortion Bill six years ago.

She said there had been consequences since the defeat of that Bill because of the House’s inaction.

Some 6,500 Irish women had ordered abortion pills online without getting appropriate treatment from doctors, she said.

Social Democrats TD Catherine Murphy said everyone has a right to equal healthcare, but that was not the case for pregnant women.

She said: “The Eighth Amendment precludes consent when you’re pregnant. That is a very significant constraint on the medical profession.”

Ms Murphy added: “So, put simply, there is no equality of healthcare in Ireland because of the Eighth Amendment.”

Green Party leader Eamon Ryan said most European countries do not have a constitutional position on abortion, that it is left to legislation.

He said he was pleased with the Minister’s pledge to come back with detailed provisions on “improving the care we provide to mothers” when they make a decision.

That the choices were full and free and not encumbered by the mechanisms the State introduces would steer that decision, “which is always going to be a hard one, one way or the other”.

Mr Ryan said: “We need to signal a change in government policy on our tax and pension systems, which make it more difficult for a woman, particularly one on her own raising a child, to be able to do so. That’s the scale of change we need.”

Sinn Féin TD Jonathan O’Brien said questions had been raised about how he could have changed his anti-abortion position in a number of weeks following the debates of the Oireachtas committee.

He said that if somebody could not possibly change their mind, then that would mean nobody had changed their mind about the vote taken in 1983 when the Eighth Amendment was introduced.

Sinn Féin TD Aengus Ó Snodaigh said going to Britain or elsewhere for a termination could cost more than €1,000, and for many women that was unaffordable. If the Eighth Amendment was not repealed, there were women “who may take desperate action” which could lead to botched abortions and more maternal deaths.

Meanwhile, Fine Gael TD Kate O’Connell said historically Ireland had always been painted as female, “our mother, our homeland, the cradle in which we were reared and nurtured’’.

She said Irish women had been confined and contained within their country.

He said he had always considered himself to be pro-life. “I do know this much, though,’’ he added.

“If, as a man, I was capable of being impregnated, there would be circumstances I would feel entitled to a say on whether that pregnancy was brought to fruition or not.’’

Labour TD Joan Burton said the women of Ireland had inherited “a Republic of misogyny and cruelty’’.

There was an Oireachtas, she added, which was “a cold place for women and girls’’.

Ms Burton said it was clear in 1983 that the amendment was wrong for the Constitution and Ireland, particularly for women.

People Before Profit TD Gino Kenny said there had been 35 years of fundamentalism on the part of the State and the Catholic Church.

He said the introduction of the Bill marked one step closer towards trusting the people of Ireland, particularly women.