Labour Senator Lorraine Higgins told the Seanad there was a legal action in the High Court for an injunction by an individual whose information was passed on to a third party by a former employee of Nama. 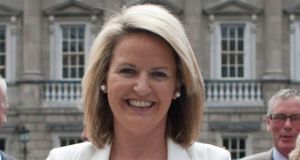 A Government Senator has claimed the State could be liable for millions of euro in legal claims due to former employees of Nama passing information on the agency’s assets to third parties.

Labour Senator Lorraine Higgins told the Seanad there was a legal action in the High Court for an injunction by an individual whose information was passed on to a third party by a former employee of Nama.

Ms Higgins said she had “damning information” about a former Nama employee, whom she named under privilege in the Upper House as Paul Hennigan, a senior asset-recovery manager at the agency.

She said he was named in the court application and that he tried to “silence” her about submissions she made in the Seanad.

When the Galway-based Senator named Mr Hennigan, Cathaoirleach Paddy Burke immediately intervened and called on her to refrain from naming people on the record of the House so that they could be identified.

“I apologise, Cathaoirleach,” said Ms Higgins before going on to refer to the High Court application.

She said Mr Hennigan had left Nama and immediately joined another property company in the UK, of which he was now a director.

“[Mr Hennigan} tried to silence me on a number of occasions when he rang my office and left a message on my answering machine, threatening me with legal action if I mentioned him in a submission to this House again on this very subject,” she said.

“I wonder really at this point what he fears, in light of what came out yesterday,” she said in reference to claims by Fianna Fáil Seanad leader Darragh O’Brien that he had information about impropriety in the property agency that would “rock Nama to the core”.

Nama, which has responsibility for €74 billion in loans, is the largest property management company in the world.

The Labour Senator also said that when she brought the issue up in the Seanad previously and called on the Minister for Finance to investigate, her concerns were dismissed. “It was intimated by the Minister to me that I was abusing my parliamentary privilege. I was essentially fobbed off,” she said.

“This is a massive issue for the Irish taxpayer who will ultimately be paying out and I think they’ve paid out enough in the last number of years as a result of austerity and corruption,” she added.

“We need to get the Minister for Finance into this House to talk and debate about this latest scandal and see where we’re going to go from this point.”