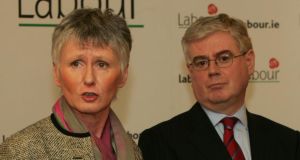 During leaders’ questions in the Dáil yesterday Mr Gilmore hit out at the Opposition after the Seanad committee of selection voted for Independent Senator Seán Barrett and Fianna Fáil’s Marc MacSharry to join seven TDs on the committee which will investigate the circumstances of the banking crisis.

Accusing the Opposition of playing “political games”, the Tánaiste said there had been an “understanding” that one Government and one Opposition Senator would be chosen and “that’s what balance is about”.

But he said a “bit of slick parliamentary footwork was performed” and they ended up with two opposition members being nominated.

Mr Cummins (FG) said in the Seanad, however, that “what happens in the other House is a matter for the other House but I can say that we intend to support the democratic decision of the committee of selection”.

He had been asked to clarify the situation by deputy chairman of the Seanad and chairman of its committee of selection Denis O’Donovan, who said he was “deeply hurt, offended and shocked by the Tánaiste comments”.

The Opposition accused the Government of “skulduggery” and “gerrymandering” in the row, remarks dismissed by Fine Gael and Labour in the furious exchanges. Fianna Fáil’s Paschal Mooney accused the Government of skulduggery and Mr O’Donovan described the unilateral move as “political engineering of the most cynical form”. The Opposition erupted when Labour Seanad leader Ivana Bacik claimed the committee of selection was “ambushed”, a remark she withdrew after Mr Mooney expressed his outrage.