Responding to a question from Fianna Fáil leader Micheál Martin, the Taoiseach has criticised the ODCE for their handling of the Sean FitzPatrick case 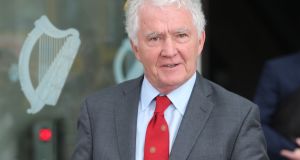 A minister performing in a similar way to the State agency in the Seán FitzPatrick trial would face instant dismissal, Enda Kenny has said.

The Taoiseach was responding in the Dáil on Wednesday to questions on the criticism of the Office of the Director of Corporate Enforcement (ODCE) following the dismissal of charges against the former Anglo Irish Bank chairman.

Mr Kenny said there was still political answerability, despite all the criticism and cynicism about politics.

“There is a situation where this person has been acquitted and is not guilty of any offence,” he said. “The taxpayer, therefore, takes up all the tab, all the costs involved here.”

He said Minister for Jobs, Enterprise and Innovation Mary Mitchell O’Connor had sought a report from the agency, including the role of all professionals involved. “Nothing is ruled out here now,” he added.

Mr Kenny said the Cabinet would consider the trial’s collapse at its meeting next week. He said he had not spent the past six years as head of Government making very difficult decisions in a situation where, again, the allegation would be people would walk away from white collar crime and nobody was guilty.

“Let us as a parliament, here, decide what it is we have to do with an organisation like the ODCE,” he added.

Mr Kenny said when requests came from the agency for resources, they were granted. Yet, the ODCE was now saying it was not equipped to take parallel investigations on the scale involved.

He said Judge John Aylmer had said the most fundamental error was the manner in which evidence had been taken from the bank’s auditors.

Fianna Fáil leader Micheál Martin said the collapse of the trial represented a damning indictment of the ODCE.

“It also reflects poorly on the gardaí and on the Office of the Director of Public Prosecutions, ” he said. “In essence, the State’s capacity to investigate serious white collar crime has been shown to be inept, negligible, wasteful and virtually redundant.”

Mr Martin said it raised fundamental questions about the continued existence and effectiveness of the ODCE and made it an imperative to consider alternative mechanisms to deal with white collar crime.

Sinn Féin leader Gerry Adams said there was a lack of accountability among the high rollers, the elites and the golden circles in the State.

“This blatant lack of accountability contrasts sharply with how people of few means and little power and influence are treated,” he added.

He said under the Taoiseach’s watch, ODCE staff had been cut from 42 to 35.

Labour leader Brendan Howlin said all citizens stood before the courts innocent until proven guilty and the courts were depended on to uphold that vital constitutional principle.

“However, we also depend on our investigating and prosecuting authorities to ensure that proper, thorough, accurate and convincing investigations of allegations of crime take place, particularly crimes that have rocked the nation,” he said.

Mr Howlin said the “manifest incompetence” of the ODCE had not only caused a public outcry but it beggared belief. “As to the notion that it is a matter of resources, coaching of witnesses and tampering with evidence are not matters of resources.”