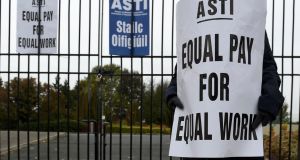 “I hope there will be a willingness to bring this particular dispute to an end,’’ he said.

Responding to questions on the teachers’ strike, Mr Kenny said the Association of Secondary Teachers Ireland (ASTI) had taken “unilateral action’’ in the summer not to work an extra hour per week, which he regretted. That matter could be resolved quickly, he added.

“I hope there is a willingness to see an end to this dispute that would allow the money on the table to be paid to teachers, the pupils to be taught and the schools to get on with their business,’’ he said.

Mr Kenny said the remaining element of the benefits from the collective situation were available to the ASTI teachers who needed them now.

“I trust that the continued bilateral discussions that are taking place will lead to that conclusion quickly,’’ he added.

Sinn Féin leader Gerry Adams said the Government seemed to be trying to ratchet up what it might see as pressure on the teachers and making the situation worse.

Pressed by Mr Adams on whether there would be equal pay for teachers, the Taoiseach said the Teachers’ Union of Ireland (TUI) and the Irish National Teachers’ Organisation (INTO) sat down with officials and, in the context of the Lansdowne Road agreement, negotiated monetary benefit and a future strategy.

He said there was an opportunity for the ASTI members, and particularly for young entrants into teaching, to avail of substantial pay increases.

Mr Kenny said he did not accept the Government and Minister for Education Richard Bruton were lax in dealing with the strike.

He said he hoped there would be a willingness to see an end to the dispute, adding it was an important semester for second-level examination students.

“It does not do anybody any good and it discriminates and does down the pupils in Leaving Cert classes in particular,’’ he added.

Fianna Fáil leader Micheál Martin said there had been a failure to engage early and effectively on the strike and the situation pertaining to the ASTI and the issues it raised.

“For some reason, the Government has not committed publicly to finding a pathway towards equal pay for newly qualified teachers, which would go a long way towards dealing with the issue, on which the TUI and the INTO made progress,’’ he added.

Independent TD Séamus Healy accused the Government of locking out teachers and 250,000 students.

“The Taoiseach should leave William Martin Murphy, the infamous Dublin employer who locked out workers in 1913, in his grave,’’ he added.

Mr Kenny said boards of management were responsible for the opening of schools and for seeing there was proper supervision in hallways, schoolyards and classrooms. “The Minister has not closed schools,’’ he added.