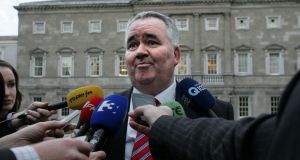 Rural Ireland will be like the “Wild West” with no shops between towns and only industrial-sized farms across the landscape unless there is a change in focus, Labour TD Willie Penrose has predicted.

He said all the talk “gets everybody on camera for RTÉ for a day, but nothing will change on the other 364 days, which are the days that count”.

Mr Penrose said industrial-sized farms were what resulted from unlimited production and allowing it so quickly.

The Longford-Westmeath TD said the aim of the Common Agricultural Policy was to maintain the maximum number of families in rural Ireland and to ensure safe, proper and adequate food supply at cheap prices to consumers.

He said the basic payment system had become “lopsided” and was never meant for large corporations or companies, some of whom were getting “obscene” sums of €150,000 and €200,000.

Minister for Agriculture Simon Coveney said Ireland was among the earliest in the European Union to pay the basic payment scheme and 125,676 farmers had received payments totalling €1.144 billion, which covered almost all applicants.

“I do not think any other country in Europe has that record. In particular, a significant percentage of farmers are still unpaid in our closest neighbour,” he said.

Mr Coveney said the dairy sector needed to be helped to get through a temporary but “very real” pricing problem.

Fianna Fáil TD Jackie Cahill said the Government had to introduce proposals to lift milk prices and the only way this could be done in the medium term was through an increase in the price of intervention. Otherwise “some of our 17,500 milk producers . . . will go bankrupt”.

Sinn Féin agriculture spokesman Martin Ferris claimed that under Mr Coveney’s watch “agriculture has slid into a crisis in so many sectors”.

He said many people believed the Minister had been a champion of the big farmer while “small and medium-sized farmers and family farms have suffered terribly as a consequence”.