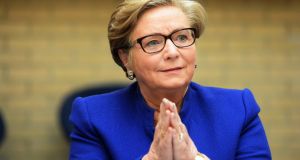 Minister for Justice and Equality Frances Fitzgerald: the best way out of poverty is having a job. Photograph: Eric Luke

Profits in the retail and hospitality sectors have risen to more than 40 per cent above pre-crash levels while the gender pay gap has widened, the Dáil has heard.

The Dublin South-Central TD said “it can’t be denied that as women work fewer hours on lower levels of pay, they are driven further and further into poverty and therefore the gender gap widens even further”.

She highlighted reports by PricewaterhouseCoopers and Morgan McKinley which showed the gender pay gap had increased from 8.3 per cent in 2012 to 15.2 per cent in 2015.

The reports “show that 3,000 women are being driven out of the workforce each year because of the cost of childcare”. This gap widened during Fine Gael’s time in government, she said.

But Tánaiste Frances Fitzgerald said there were quite a number of areas highlighting how well Ireland was doing.

Women combining work and family life needed access to high-quality, affordable and accessible childcare and the Government was committed to doing that.

A second free pre-school year had been introduced, availed of by 120,000 children. And for the first time children with special needs were receiving supports and services, she noted.

She also said another survey indicated that income inequality decreased last year, and that was as a result of decisions taken in recent budgets.

Ms Smith said however that in the reports it was not the case the State ranked well “but rather that it ranks 25th out of 33 OECD countries for overall female economic empowerment”.

The Tánaiste said the best way out of poverty was having a job. But Ms Smith replied “not if they are Tesco workers on pre-1996 contracts, most of whom are women”. She said “their contracts have been arbitrarily torn up by Tesco bosses, which is breaking the law”.

Ms Fitzgerald told her the Workplace Relations Commission and the Labour Court needed to be used in this case.

She added that reversing minimum wage cuts, promoting wage transparency by requiring companies with more than 50 employees to complete wage surveys, and giving a strengthened role to the Low Pay Commission on the gender pay gap all made a difference.