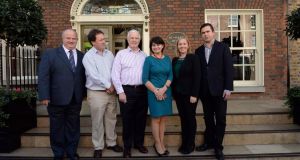 Seven TDs and senators expelled from the Fine Gael parliamentary party have held their first day of formal discussions on a collective approach in the Oireachtas.

The seven: TDs Lucinda Creighton, Billy Timmins, Peter Mathews, Terence Flanagan and Denis Naughton along with senators Paul Bradford and Fidelma Healy-Eames examined economic reform, job creation “and all of the issues which are most pertinent to people”, Ms Creighton said.

Speaking to The Irish Times during a break from their all-day talks in Dublin she said: “We’ve also had lengthy sessions on political reform with very wide-ranging and interesting ideas emerging.” She added: “ It’s a first day to explore a lot of policy issues but I’m really happy with it. It’s been really good.”

The five TDs and two senators have formed the Reform Alliance and insist theirs is a loose grouping and not a new party in the making.

“Group is as formalised as it can be,” Ms Creighton said. “We are now an alliance of individual members of the Dáil and Seanad, we have a lot of common interests and objectives. We are now established, we are the Reform Alliance because that’s what we are interested in. It’s early days yet - we’re at the beginning.”

In addition to discussions on the economy, Ms Creighton said they also addressed Dáil and Oireachtas reform adding: “But we will be looking at a much broader and holistic approach to political reform right down to local government, national government and the electoral system. We have to tease those out a little further, but we will be presenting proposals to the Dáil and to the Government and will be doing that in the weeks ahead.”

Asked if the group discussed how they could regain the Fine Gael party whip, she said: “We’re not troubling ourselves with that. The party leader Enda Kenny and senior colleagues have made it absolutely clear that there is absolutely no prospect of us being candidates under the Fine Gael banner for the next election.”

She went on: “Most of us are still members of Fine Gael and I value my membership but I also have a job to do as a parliamentarian.”

Pressed on re-admission to the parliamentary party she said: “We haven’t had such a discussion and I don’t believe we’ll be having such a discussion. It’s not really for us to discuss – we’re focused on the future – how we can have an impact in parliament and how we can put forward real solutions to the problems of the Irish people and that really is it.”

Ms Creighton said that despite two of the group coming from the Seanad they were deliberately leaving open the question of abolition.

“We have a range of views on abolition. If the Seanad referendum is not successful and it lives to see another day we are very much committed to both Dáil and Seanad reform. That will be included in our political reform proposals in due course.”

She added: “I have expressed my grave reservations about Seanad abolition, I think it is entirely premature. It is something that could and should only be considered in the context of wide-ranging reform which is not on the agenda at the moment.”

The Dáil and Seanad should complement each other in terms of checks and balances, she said “in terms of trying to hold what is an extraordinarily powerful executive to account”.

Describing the Coalition as “the most centralised of any governance system in Europe”, she added: “This is something that I have a major problem with. That is my view, but others in the group may take another view. So we haven’t taken a position on abolition of the Seanad but we are taking a position on reform of the Seanad.”

The Dublin South-east TD said she has received an “unbelievable response” following her appearance on Friday’s Late Late Show.

“I’ve had today, probably well over 100 emails. I think I had one negative email but the rest were extremely positive and interested in the Reform Alliance and hoping that we can bring some new thinking into Irish politics and the Oireachtas.”