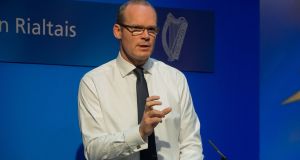 Raw sewage is being pumped into Cork harbour by 50,000 households, Minister for Housing Simon Coveney told the Dáil. That represented about 35,000 wheelie bins daily, he said, adding that Irish Water would have the problem fixed in 18 months at a cost of nearly €100 million.

“There is a lot to do here,” said Mr Coveney.

He said there was also a funding package for group water schemes, which had been signed off on with representative bodies.

The Minister was replying to questions on the implications for the financing of the Irish Water capital programme to 2021 from any reduction in water charge revenues arising from the findings of the independent commission and decision by the Oireachtas.

Mr Coveney said the capital contribution agreed by the Government for Irish Water this year was €184 million, which had already been paid to support its increased investment in public water services infrastructure. The balance was being supported through borrowing, he added.

He said the Government was committed to retaining Irish Water as a single national utility in public ownership responsible for the delivery of water and waste-water services and to protecting the €5.5 billion investment set out in the 2014-2021 business plan to upgrade the national infrastructure.

“That is the reality for the people,” he added.

“It is certainly a reality for the local authorities which have in many cases continued to do the work, and all we have seen is an additional layer of management put on top.”

Mr Kenny said the local authorities, and the good staff who had worked in them, had done an excellent job with limited resources.

He said he agreed with the Minister there were many instances where raw sewage was poured into the sea and into rivers and there were significant problems to be addressed. The lack of adequate funding was the real problem.

Mr Coveney said he was tempted not to get into the water charges debate around ring-fencing adequate funding.

The problem, however, was each local authority was doing its own thing, with many of the 31 systems unconnected.

“There was no interoperability. There were no economies of scale.”

He said there was no central skill set of staff.

“Irish Water is a single utility that can achieve many of the more national strategic goals that need to be attained around water that individual local authorities on their own could not do,” said Mr Coveney.