Opposition attempt to have former FG TD voted down 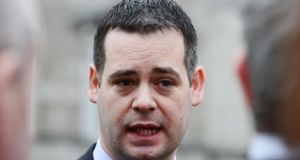 Sinn Féin Spokesperson on Finance Pearse Doherty is one of seven TDs confirmed to be on the committee of inquiry to investigate certain matters in the banking crisis. Photograph: Alan Betson

The public is entitled to a full account of the banking crisis, Taoiseach Enda Kenny has said.

“Hundreds of thousands of people lost their jobs. Many more have suffered pay cuts, while more again have been forced to emigrate,” he said.

Mr Kenny added that “a generation of people have suffered the consequences of negative equity”, while the State lost its sovereignty. In those circumstances, he said, the Irish people were entitled to a full account of the crisis.

Mr Kenny was speaking in the Dáil as he introduced the debate to establish a committee of inquiry to investigate certain matters in the banking crisis.

A decision has not yet been made on the two Senators who will join the committee.


‘Too much hardship’
Tánaiste Eamon Gilmore said the State had seen “too many examples of where boom is followed by bust”, and there had been “too much pain, too much hardship, to just move on without devoting the time and resources to learning the lessons”. He said Irish society was affected by the normal business cycle, “but too often the hard work and enterprise of the Irish people, including the good work of the public service, has been allowed to be squandered by bad politics and bad policies”.

Mr Gilmore added that the crisis “had its origins in an unsustainable property bubble that was fuelled by inappropriate tax incentives”. He said there were “several moments when this could have been reined in but it was not. We also know the property bubble was pumped up and driven by bad lending decisions in banks.”

In effect, he said, “what came into being was a toxic triangle between politics, property development and banking”.

Fianna Fáil leader Micheál Martin hit out at the Tánaiste, saying some of his remarks “prejudge this inquiry”.

Mr Martin said his party welcomed an inquiry, and it had an important role in dealing with the aftermath of the effective collapse of our financial system and its long-term impact. But it would “not support efforts to politicise the inquiry, to narrow its focus and to indulge in a highly selective approach to a serious national issue”.


Criminal cases
Sinn Féin’s Pearse Doherty warned that there were still criminal cases to be taken in the next few months in relation to the banking inquiry. He said the inquiry could be no substitute for criminal investigations into those who might be guilty of wrongdoing in the lead-in to the crisis or its aftermath.

Independent TD Shane Ross said he was doubtful about the capacity of the Dáil to make judgments without political bias. The Dublin South TD said he had ruled himself out as a potential member of the committee of inquiry because “I am biased against bankers”.

Independent TD Stephen Donnelly suggested there should be an extra non-Government committee member so there would not be a Government majority and the party whip should be removed from TDs on the committee.

An attempt by the Opposition to have former Fine Gael TD Peter Mathews included on the committee was voted down.